A Western domestic comedy made in a rush by John Wayne’s production company Batjac for a mass audience and to recoup the losses caused by his last film that bombed in the box office, The Alamo, otherwise his production company might go under. It’s a film rooted in the past, some might say it’s a dinosaur, out of step with the modern world, criticized by feminists, for its arbitrary right or wrong stand with no middle-ground, and frowned upon by many critics for its right-wing political stand. James Edward Grant provides the screenplay, which borrowed freely from Rio Grande, The Taming of the Shrew and The Quiet Man. It certainly has John Ford’s fingerprints all over it and includes many character actor regulars from his Westerns (Ford even directed for a few days when McLaglen became ill). Unfortunately it’s more shallow than the above named films and less interesting, though it has many of Wayne’s classic trademark scenes including a big sprawling fight in a mud pit that came about when Wayne came to the defense of his Indian friend about to be hanged for something he didn’t do and by punching out his unjust accuser (Leo Gordon) he mockingly calls Pilgrim. McLintock! became the legendary star’s most popular and successful films of the ’60s. It’s directed by Victor McLaglen’s son Andrew and produced by Wayne’s oldest son Michael; it also stars Wayne’s other son Patrick and his daughter Aissa in a smaller role.

As the opening credits roll by, the hit 1960s folk group The Limeliters sing the rousing theme song “Love in the Country.”

Cattle baron George Washington McLintock (John Wayne) owns the biggest spread in the territory, a lumber mill and a mine, but has been upset the last few years because the hot-blooded wife he loves Katherine (Maureen O’Hara) has left him for no clear reason and Sooners (homesteaders) in droves have been brought in by the corrupt land-grabbing windbag governor Robert Lowery (Gov. Cuthbert H. Humphrey, spoofing on liberal Democrat Senator Humphrey) to farm the mesa land that can’t be plowed. The plot has McLintock being spokesman for Indian rights as his Comanche friends are being screwed by Governor Lowery and when this serious business is resolved McLintock has to deal with the return of his abrasive wife who nags and orders him around. Katherine has returned to greet their 17-year-old daughter Becky (Stefanie Powers), who is just back from attending college back east.

A mild story develops of the reactionary self-made two-fisted macho drinking man G. W. hiring homesteader Devlin Warren (Patrick Wayne) as a cowhand and his widowed mom Louise (Yvonne De Carlo) as cook and her daughter Alice (Aissa Wayne) as helper. Ramrod Drago (Chill Wills) is McLintock’s loyal longtime worker and friend, general store owner Jake Birnbaum (Jack Kruschen) is his fellow chess player and friend, Bunny Dull (Edgar Buchanan) is the friendly hobo who gets regular handouts from McLintock, Matt Douglas (Gordon Jones) is a pompous, crooked and wormy bureaucrat (substitute liberal for bureaucrat and you get Wayne’s drift), Indian agent Agard (Strother Martin) is an inept fool, and hired hand Curly Fletcher (Hank Worden) is uneducated but is okay in McLintock’s book because he does his job, hero worships him and doesn’t make waves against the system. A subplot develops as Becky is pursued by college grad Douglas’s stuffy son and good old-fashioned boy Dev, who McLintock favors. It all leads to McLintock taming his fiery red-headed bride with a public spanking in front of the whole town while she’s in her undergarments.

Wayne shows he can master slapstick comedy, if need be, as this is his best comic effort. Though not one of his better films, it still entertains as a crowd pleaser–giving the public what it wants usually helps. 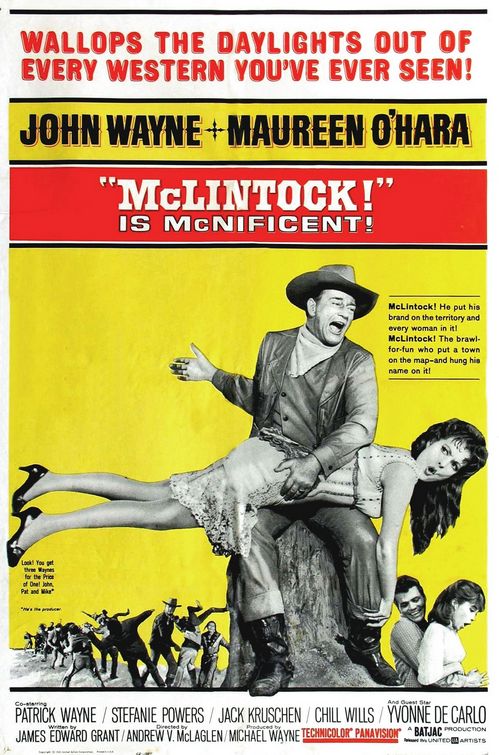