“The directors are serious students of the past…”

An historical fantasy film that took eight years to make. Kevin Brownlow started it in 1956 when he was 18 and was helped by the 16-year-old co-director Mollo; they finished it in 1964, but had to wait two more years before United Artists could distribute it. This low-budget independent effort (it had a whopping budget of about $20,000), initiated from an original idea by Kevin Brownlow. The events are make believe; the B/W film resembles an Orwellian nightmare. It is an intensive study of what it might have been like in England in 1944 if it had lost the war and had been occupied by the Germans. The directors are serious students of the past, and their aim is re-create a fictional past.

Kubrick furnished Brownlow with some of his leftover film stock from Dr. Strangelove to finish shooting it; another established director, Tony Richardson, also helped the filmmakers out.

The German invasion of England took place in July 1940 after the British retreat from Dunkirk. The British resisted at first, but the German Army beat down that resistance. The resistance movement lacking outside support, was finally crushed. Then, in 1944, the resistance movement reappeared. This is where this fantasy film begins. It looks as if it is a semidocumentary, with scenes padded for dramatic effect and narrative.

Pauline Murray (in real-life, she is a doctor’s wife) is the main character; she is an apolitical Irish-born district nurse working in the area of Salisbury, who gets caught up in the horrors of the conflict. The partisan movement uses terror to get the Germans out of the rural towns they have captured. This forces the Germans to evacuate all the civilians in those towns. She witnesses six of her closest friends gunned down by the partisans, and decides to make her way from the country to the demilitarized zone of London. She fears that she can’t work as a nurse unless she joins a British Fascist organization; and, she is also fed up with the violence on both sides, thereby she naively joins the Immediate Action Organization (IA) and is trained to work in their fascist methods. She is most proud of the new shoes they give her, which is probably one of the appeals the Nazis had when starting out in impoverished Germany. To answer her concerns that the IA looks just like the Nazis the leader tells her, we must organize ourselves like the Nazis to succeed. We must be even better organized than they are. To calm her fears the fascist leader also says: when the war is over, then we will see what happens.

Pauline will gradually see through their deceits, remaining loyal to her friends who harbor partisans rather than being loyal to the IA. She hears the IA diatribes against the Jews and the call for euthanasia to rid the country of the undesirables, but she only wants for things to be normal again in England. The power in the film is from the sheer force of the clash of ideas and the expressions coming forth from the nonprofessional actors. The film allows you the luxury to see things for yourself instead of being spoon-fed what to believe.

Who better to play a fascist, than a real live one-Frank Benett! He presents his case for hatred in his own words which at the time frightened many people, including certain British Jewish organizations who feared his message would be taken literally. The result was that seven minutes of the film were cut until recently, when Brownlow regained control of the film and Milestone released it for the first time in its full version. It was the directors intention that by having the neo-Nazi leader speak his mind; he would reveal how ridiculous his ideas were, which proved to be true.

One of the more interesting scenes was that of the patients suffering from tuberculosis being transported to a comfortable hospital. They were played by real TB patients and were moved into a real TB rehabilitation center. This scene of euthanasia was done in a most humane manner by injecting them with poison, it was one of the most powerful and stunning scenes to behold.

The filmmakers used mainly original rather than merely authentic costumes and props, and they refrained from using any archival footage — which would have been easy to obtain. They drew most of their sense of history from the 1940s by watching newsreels, but in the film they only used voice-overs from professionals who donated their services and used montages and close-ups to get the 1944 look they wanted. You can say whatever you want about their methods, but when you look at the results you feel the intensity and madness of the drama, it has a curious starkness about it that is very compelling. It had the mark of a true artist’s stamp on it, even its amateur production values do not weigh heavily against it. Even the ending of the film which comes to no particular conclusion — it just ends by allowing this remarkable work to be viewed for what it suggested. It certainly took the smugness out of anyone thinking that fascism couldn’t surface in a country like England. Everyone in the film was compromised to a certain extent, including the decent Pauline Murray who fell for the phony appeal of the Nazis by thinking they could bring law and order to a country reeling from riotous conditions. It showed the final liberation by the Americans in an ironically gruesome scene, where collaborators were rounded up and executed. Earlier on, it showed the Germans killing off the villagers and quietly smiling as they went about their business. A call for pacifism–that is the clearest message that could be heard from between the lines when all is said and done. 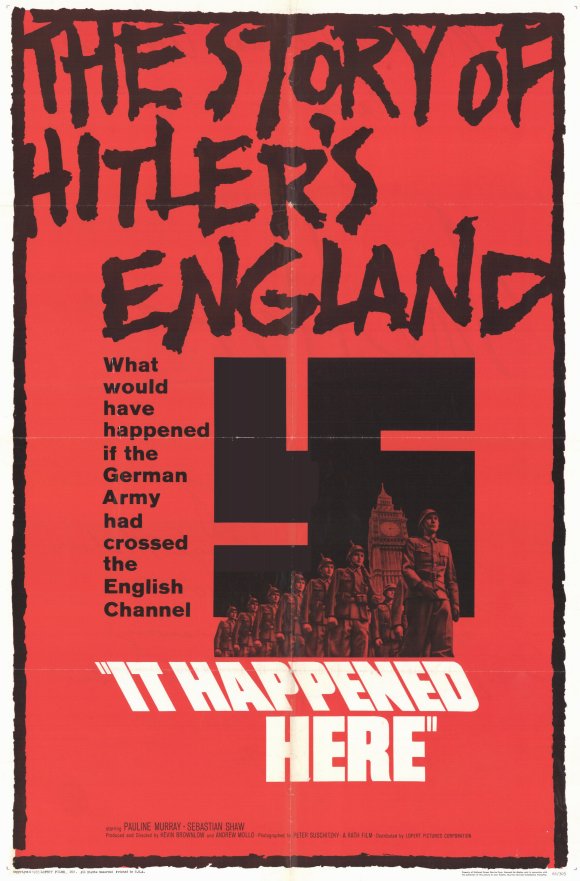