“The problem is that “Willard” never becomes anything more than a ham-fisted revenge-of-the-nerd horror fable.”

Willard is a remake of the 1971 thriller “Willard” starring Bruce Davison in the title role as the quivering young man who is afraid of his own shadow and fits the classic Freudian description for a momma’s boy unable to cut the umbilical cord. The older version had more feeling and humor than this almost leaden special effect version, one that tried not to be campy yet was still not serious enough to be taken as anything but campy.

It’s still about Willard Stiles (Crispin Glover), a thirty-year-old loner, loser and weirdo living at his stately 19th century family mansion in suburban Westchester County in New York with his possessive, belittling, widowed, frail and elderly mom (Jackie Burroughs), and he is still haunted by the death of his imposing manufacturer father. He owes his job to his dad, who because of bad debts was forced to sell his share of the business to Frank Martin but stipulated in the contract that Willard was never to be fired (R. Lee Ermey plays this one-dimensional Martin role in the same way Ernest Borgnine did in the original and uses the same acerbic speech delivery he used as the drill-sergeant in Kubrick’s Full-Metal Jacket).

When Willard discovers rats in the house because of the old houses in the neighborhood being sold and the new owners remodeling, he therefore first tries getting rid of them with the usual pest control traps but decides to befriend them after feeling sorry for a white rat he caught in a sticky glue trap and in a change of heart freed. He keeps the rats in his basement as pets, and the white rat becomes his best friend and is given the name Socrates and is allowed to sleep with him. Another rat about as big as a dog he names Big Ben, but looks upon him with disfavor because he doesn’t obey his commands like Socrates.

In the workplace at his menial office job, Willard’s sadistic boss never misses a chance to humiliate him. Willard is accused of falling behind in getting the purchasing orders out and an attractive office temp named Cathyrn (Laura Elena Harring) is hired to do his job, as everyone in the dreary office setting witnesses the boss unmercifully chew out the flustered Willard. In another ugly incident, boss Martin goes off on a nasty rant about Willard’s poor work habits and locks him in the elevator. Cathryn feels sorry for the hapless lost soul and frees him, and then she tries to be friendly and nurturing toward him. But Willard can’t relate to humans as well as he can to rats. In this flick the rats are out of character and are envisioned as predictable creatures who all follow Willard’s marching orders except for the most fearsome Ben.

Willard is bent upon getting revenge on his evil boss who constantly mistreats him and is putting pressure on him to sell his house and quit his job. So Willard becomes the Pied Piper of the rat-pack and packs into his suitcase the 500 real rats plus those that were CGI animated, in a seamless manner so you couldn’t tell the real ones from the fake, to invade Martin’s garage and eat the tires off his snazzy new Mercedes-Benz. The revenge motive picks up greater urgency when tragedy hits Willard at home, and on top of that Martin unceremoniously cans him and is about to kick him out of his prized house which is the only security blanket he has left.

Director/writer Gilbert Ralston attempts to transform Gilbert Ralston’s novel Ratman’s Notebook into a Hitchcock-like psychological horror drama that would have recognizable elements of Psycho and The Birds. He purposely updated the film with that in mind while keeping the same plot, as it’s still a creepy story about a troubled loner who gets overwhelmed by his situation in life and cracks up. The anger in Willard grows and the rats are humanized to take on his anger, as they are called upon to act out Willard’s wishful fantasies to get the main culprit who has demeaned him the most. But what fails to work, is that Willard is too much of a nut job and his conversations with the rats are meant more to amuse than for the viewer to sympathize with him.

The film not only lacked humor (one of the film’s more funny bits is naming a pest control Tora Bora) and was not scary (the hundreds of rats squirming around the kitchen counter-tops looked as if they were in a Tom and Jerry cartoon), but worse than that was its failed love interest subplot which took up so much film time and went nowhere. It was needlessly clunky and way too underdeveloped to be interesting. Also, the film relied much too heavily on Crispin Glover’s hammy performance. He’s the caricature of an intense milquetoast who is capable of a temper tantrum and of having a bleeding heart, but that two-dimensional characterization is not enough for the film to get past its Psych 101 lesson. The pasty faced, jet black-haired Glover, whose haircut is in the Adolph Hitler style, varies in his hysterics over loathing his boss or becoming so frightened he can’t function or when at home caressing in a loving way Socrates. When hysterical his voice becomes shrill and his facial features become contorted.

Glover gnaws the scenery even more than the rats do. One expects a film like this to be cheesy, but not one with such a cold and empty heart. It was hard to maintain a sympathy for Willard the nuttier he acted, and it was even harder to find much of a psychological story that had any freshness or validity. The problem is that “Willard” never becomes anything more than a ham-fisted revenge-of-the-nerd horror fable. 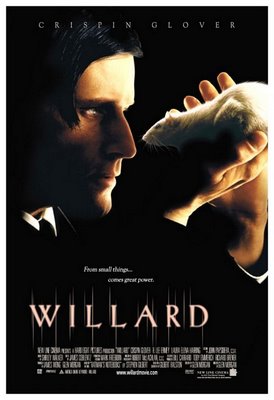 WOMAN IS THE FUTURE OF MAN