“It’s not a great film, but it is captivating in its grandeur.”

Fox presents this John Ford directed silent epic western. It’s about the building of the first transcontinental railroad and is dedicated to the idea of Manifest Destiny. At times the film is a brilliant depiction of the hardships of building a railroad, but it’s also marred by its racist view of the Indian, the stereotyping of the Irish and the foreigners who built the railroad, the many deadspots in the storytelling, and a lot of patriotic blarney it poured into its storytelling. It was shot on location in Monument Valley, Arizona. The Iron Horse was a big-budget production that employed over 6,000 people. The epic also pays homage to President Lincoln for his visions for the future of America.

The film opens in Springfield, Illinois, where the Brandons and Marshs are neighbors. Their two children are fond of each other. David Brandon is a surveyor who dreams that some day the country will be united by a transcontinental railroad. Thomas Marsh is skeptical. Abe Lincoln ambles by and tells Marsh that the dreamer will have his dream come true some day and you will be there to build the railroad.

Brandon goes west with his young son Davy, but they get jumped in the Cheyenne hills by a pack of Indians led by a vicious white man with only two fingers on one of his hands. Young Davy hides, while his father is slain by the white man.

As the years go by, Davy (O’Brien) becomes a rider for the Pony Express in the area he lost his father. Escaping a party of attacking Indians, he jumps into the railroad car of Thomas Marsh (Walling) and his daughter Miriam (Bellamy). Marsh is building a railroad as President Lincoln, even as the Civil War was going on, signed legislation for a railroad to unite the country. The young lovers are once again reunited, but Miriam is engaged to her father’s engineer Jesson (Chadwick).

Marsh needs a short cut through the Cheyenne territory to save expenses, and Davy is hired as a surveyor because he knows where there is a shortcut. The problem is that a greedy landowner named Deroux (Kohler), who is really the two-fingered white man killer of his father, doesn’t want them to get that shortcut. He bribes the cowardly Jesson to kill Davy, as he promises to make him a rich man and also offers him the bar slut Ruby (Hulette).

Davy survives the attempt on his life and returns to team up with a quaint and irascible Irish Union Army veteran, Casey (MacDonald ). The men fight back constant Indian raids on the railroad, the double-cross of Jesson, the villainy from Deroux, the fighting among the ethnic workers, and all the while the railroad workers sing politically incorrect Irish ballads while working. After Davy gets his revenge he has another chance to reunite with Miriam, and after a misunderstanding they get together for good just as the golden spike is being driven in at Promitory Point to unite the Central and Union Pacific railroad lines in 1869.

The film had all the mushiness and brilliance displayed throughout Ford’s long and distinguished career. It’s not a great film, but it is captivating in its grandeur. 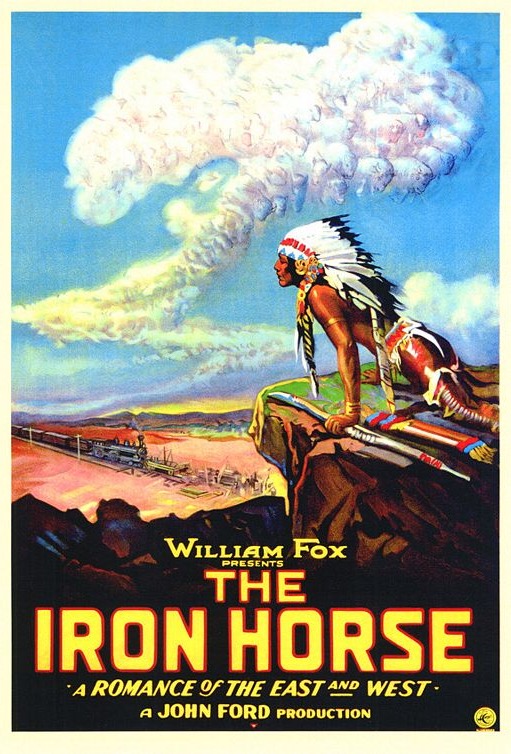