“The acting was convincing.”

Marta (Maja) is a do-gooder. She sees a boy crying while she is in a rush to go to work and she stops to help him with the problem he is having with his teacher. This is the same teacher her son has. So she ends up meddling, telling the teacher what to do, which causes the teacher to take it out on her son and fail him. Marta works as an accountant in an office and is also the union representative where she gets a chance to help her friend and confidante out, who is accused of stealing. Marta still insists on helping her friend even though her friend talks to her boss about her behind her back, which the boss tells her about. All she can say, is that she needs my help because she is weak.

By chance Marta gets a lift to work by a former acquaintance, someone she hardly remembers, a handsome trainer, Jacek (Marek Piwowski). An attraction develops between the middle-aged Marta and the athletic and free spirited Jacek, who tempts her with his worldliness. But she can’t decide whether to leave her husband Jan (Fronczewski) or to stay and try to make the marriage work for the stability of the family, even if the marriage has lost a lot of its romance. What makes her decision difficult is that she can’t cheat on her husband without feeling guilty, so she says that her choice will have to be to leave him or stay with him as a faithful married wife. What also makes her decision difficult is that Jan is such a decent guy who does nothing wrong, he does not even try to tell her what to do when he realizes what is going on.

Marta slowly gets to know herself better and begins to see what other people think of her: she learns that others think of her disdainfully, as a do-gooder who causes more harm than good.

By putting herself through an emotional ringer Marta does find out about what she is really made of and what her marriage means to her, and she is strengthened by the experience in a way that she has never felt before.

The acting was convincing but the story didn’t have enough suspense to sustain interest, especially when the ending was becoming increasingly predictable. What interested me was how tired life in Poland seemed and how the real enemy seemed to be the bureaucratic nature of the country. I thought of how different things were in America during that time frame of the ’70s and of how similar bureaucracies seem to be wherever they exist. 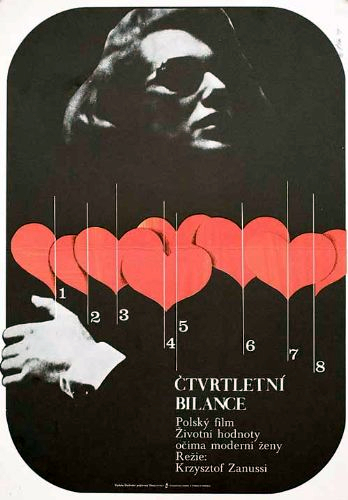