“It’s a mostly forgotten work today, despite its all right construction and the funny performance by a restrained Sellers.”

A class-struggles satirical comedy set in London by director and co-writer John Boulting (“Suspect”/”Seven Days to Noon”/”Brighton Rock”). It’s based on the short story “Private Life” by Alan Hackney, with Hackney and Frank Harvey co-writers. The Boulting Brothers (producer Ray and director John) target the British trade unions, factory life and the scions of the British munitions industry for their scathing very much British satire.

It follows the recent bumbling Oxford grad, the socially awkward Candide figure of a man, Stanley Windrush (Ian Carmichael), who eagerly wants to work unlike the loafers from his upper-class. Windrush tries out for jobs in industry with the full expectation of working his way into a management position and up the ladder, but things somehow take a wrong turn. His upper-crust aunt Dolly (Margaret Rutherford), a Margaret Thatcher type, is horrified at the idea of him taking a job.

We witness the inept Windrush antagonize employers at a detergent factory and at a confectionery factory, before his uncle Bertram Tracepurcel (Dennis Price) offers him a lowly position as an unskilled laborer at his armaments factory, Missiles Ltd. It seems his foxy uncle has ulterior motives for giving him the job, as we soon find out.

Major Hitchcock (Terry-Thomas), his uncle’s sly factory manager, is trying to undertake a time and motion study by hiding Water’s (John Le Mesurier) as a member of the workforce to clock their productivity, but the workers are too vigilant of the suspicious newcomer to allow him to take the survey. Therefore the Major will turn to the naive Windrush to unwittingly be the stooge to take his place.

The upper-class Windrush operates a fork-lift, but is revealed as not a union member. When the union shop steward, the Russian loving Marxist ideologue, the uneducated Fred Kite (Peter Sellers), sporting a Hitler-like mustache, learns of this, he demands that Windrush be fired, as he believes that Windrush is the stooge the management hired to be the new time and motion study man. When the manipulative Major points out that Windrush’s appointment was a clerical error and agrees to fire him without arguing, Kite changes his tune and threatens to strike if he is canned. The factory manager and the union shop steward then approve of Windrush’s appointment despite his lack of union membership, and Kite even gives him lodgings in his home.

Windrush is unwittingly duped by Water’s into taking part in the time and motion study, and while doing the job honestly works more efficiently than the previous workers. This results in a new work schedule that angers the workforce. The calculating Tracepurcel (Dennis Price), the factory owner, has purposely introduced the new schedule to instigate a strike. It’s a complicated arms deal between the friendly rival munition factory owners to complete a lucrative swindle with an Egyptian Arab delegate, Mr. Mohammed (Marne Maitland), at an inflated price and they will split the profits three ways—between the two factory owners, Sidney de Vere Cox’s (Richard Attenborough) and Tracepurcel, and the crooked Arab delegate.

Things go awry when Cox’s factory surprisingly goes on strike in sympathy, and the crooked businessmen find they can’t seal the deal amid a national strike. This brings about the downfall of Cox on Malcolm Muggeridge’s national live TV show, as the angry incorruptible Windrush tells off the greedy phony industrialists by telling them to keep their hush money they gave him in a satchel. For his trouble, Windrush is sent to the sanatorium.

The film is entertaining, but its neutral stand between management and the workers and its purely British look did not serve it well with foreign audiences. It’s a mostly forgotten work today, despite its all right construction and the funny performance by a restrained Sellers. 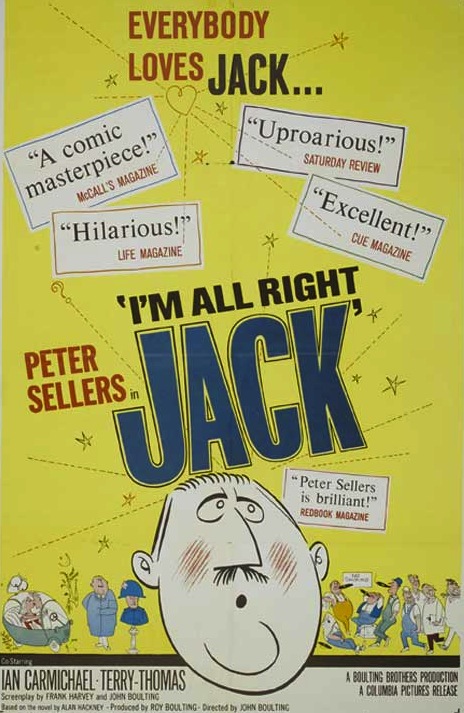