INTO THE BADLANDS (TV)

An absurdly muddled made-for-cable horror-western by New Zealand director Sam Pillsbury (“The Quiet Earth to the Cajun”/”Free Willy 3”). The film makes no sense, has gratuitously violent scenes, but it’s well-acted and photographed. It’s taken from the following three short stories: Heck Allen’s The Streets of Laredo, Marcia Muller’s The Time of the Wolves and Bryce Walton’s The Last Pelt. They are loosely interwoven stories connected by the presence of greedy white-bearded cart riding bounty hunter T.L. Barston (Bruce Dern), who is in pursuit of a wanted man, Red Roundtree, that places him in all three stories.

The film opens with a voiceover by bounty hunter Bruce Dern: “Back in the days of the Old West, there were these stretches of territory that I think God and nature just plain forgot about… dark and parched and empty as the moons of Mars. Places where sensible men never ventured… where only dreams and phantoms walked. Kind of a way station between civilization and the Ninth Circle of Hell – The Badlands.”

In the first tale wanted murderer McComas (Dylan McDermott) is fleeing to Mexico to escape Sheriff Aaron Starett (Andrew Robinson), who is determined to capture the killer of his brother. In the border town of Laredo, McComas meets sexy saloon gal Blossom (Helen Hunt), who is dying of consumption. They fall madly in love and have a quickie before he crosses the border. But to get out of town, he must fight a gun duel with the pursuing sheriff.

In the second tale Barston entertains with tall tales a prairie family living in desolation but leaves before an oncoming storm. His host’s wife Alma Heusser (Mariel Hemingway) goes out before the storm to keep their neighbor’s wife, Sarah Carstairs (Lisa Pelikan), company since her hubby had to leave on business. Sarah’s an eccentric culture vulture from Boston who is out place on the prairie, spouting poetry, acting nutsy and hostile. Later when Alma returns home at night, she may or may not be under attack by wolves trying to come through her window. It’s a scene that proved to be not only senseless and annoying, but pretentious.

In the third tale Barston guns down Red Roundtree, but when he returns to town can’t get any one to sign a statement that they can identify the corpse on his cart as Red’s and hangs around so as not to lose his reward money. This leads to him having to face down Red’s four drinking buddies.

Into the Badlands is a trip into nonsensical moviemaking. 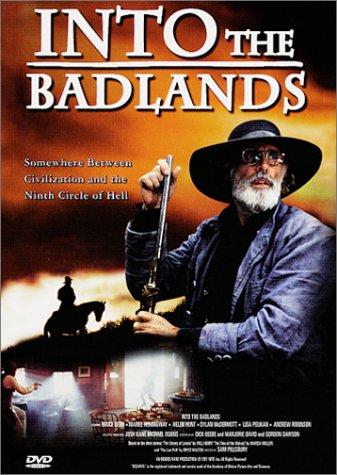