This is the first film made under the label of Dogma, a Scandinavian film group inspired by the Danish director von Trier. It insists in their new manifesto on how to make films that its dogma be adhered to by those who make films under their label.

Improvised acting and hand-held camera work are the many dogmas the film must adhere to. It reminds me most of how Godard filmed during his Mao stage, but without the apparent overt political messages seen in Godard’s anti-film films during the late ’60s. His films were diatribes against the bourgeoisie which seemed filled with the director’s hubris and self-congratulation on his political stance, implying that he was right and others wrong in their beliefs.

The Idiots, which was written by von Trier in four days, has a bunch of middle-class cult groupies living together in a rich private house that one of their relatives lets them use. The group members seem to be either in their late teens or in their early 20s, whose repulsive purpose is to freak out in public and sometimes do it when together in the privacy of their house. To spasse is a Danish term, which refers to those who act like idiots even though they are not. These episodes of spassing give this film an odd look that is guaranteed to turn off a lot people and anger many, especially those who expect more conventional ways of looking at and responding to the problems young people face in society.

The theme of the movie is certainly obnoxious– it is very difficult to feel much of anything for these middle-class drop-outs, as we first encounter them in action in an elegant restaurant and watch them spasse. They act retarded eating their food under the direction of one of them (Susanne) who pretends to be their keeper; meanwhile, the one doing the spassing, Stoffer, grabs onto a lady (Karen) sitting alone and refuses to let go of her. Karen seems to be responding kindly to the idiot, just like she didn’t react with any ill emotion after being treated rather brusquely by the waiter when she told him she doesn’t have much money and will be just ordering the salad. The group leaves together with Karen and tells her it is just a game they enjoy playing, inviting her to join them; even though, she does not appear to be of their ilk. They invite her to join them because she does look desperate and lonely and unhappy.

They do another spassing in a Rockwood furniture factory, which was more stupid than humorous and it belabored any point that was trying to be made about workers in a factory or about middle-class values; it was goofy fun in a way to watch them operate so spastic-ally. It seemed to be similar to the way that college fraternities might find their initiation rites uplifting to their older members who already went through the process, but to outsiders it would seem like they were seeing a bunch of spoiled children.

In another public spassing, Jeppe is left by the one playing his keeper (Stoffer) with a burly looking bunch of tattooed, beer guzzling biker types. The bikers are asked to mind him for ten minutes, this is after they notice Jeppe staring at their tattoos, while the keeper goes to the other part of the bar. Again it was not funny, yet it was curiously interesting in a prurient kind of way to see the interaction between these two groups of outcasts.

Stoffer, the leader of the group, spun a bottle and whomever was chosen would have to spasse in front of family members or those they previously worked with. Axel and Henrik could not do it and thereby left the group. What was becoming increasingly clear was that the game was almost over for all of them, that they couldn’t really confront the idiot inside themselves, that it was just a temporary game they were playing; perhaps, because they were in an experimental phase of their young lives and this was their rebellion before they settled down and acted like the adults they were expected to be.

The point that von Trier was trying to make, is that you really have to be an idiot to change the system or think that you can change it. That you can only be effective when you really confront who you are, reaching past the point of where authority rules who you are; or else, you are stuck with the same cultural values you have always had and can’t really change who you have been brought up as. Being an idiot is the last act of despair. It is an act of courage. And, it only matters when you can do it for real and not be using it to play a game. For von Trier, being an idiot is an endearing way at looking at someone acting out who he is. It is a way to initiate real change in the system.

Karen’s story now unfolds; and, she turns out to be the one with the most dramatic story to tell. She volunteers to go back home to do her spassing, with Susanne as her witness. We meet her family who act cold towards her, asking her where she has been for the last two weeks and wondering why she didn’t go to her baby’s funeral. We meet her husband, who shows her no love. We see her spass while eating cream cake after dinner, acting as her baby might have acted when eating something not tasty; and, for this display she gets slapped by her husband and leaves the house with Susanne, who is filled with genuine tears.

The trauma for the group has reached a point of no return, and the very dangers of spassing or regressing back to one’s childhood memories seems frought with extreme personal dangers, and the possibility of a psychosis developing looms over all the young people’s heads.

Trier has made his point. This very unusual personal film that is very difficult to warm up to, mocks what is conventionally thought of as right by doing what is unconscionable and politically incorrect. It becomes only too real and too sad to comprehend, and is presented so as not to give the idiots a way out to deal with the alienation they feel. They seem to be left with only their naive hopes and disillusionment; and possibly, their emotional experiences that they can value. Their situation is not resolved. The film does not end with all loose ends tied up in a nice bow. We can’t even be sure how long their commune life will continue and how soon it is that they will find themselves out in the cold world alone again as misfits, where some of them will fit in without too much trouble but will be living a lie. And, where others will find it very difficult to go back to being middle-class and will always be restless living in such a society. But they tried something … and whether they reached their inner-self or not, something penetrated. Whether they are the better for this experience, is difficult to tell; but, something significant did take place — just as we in the audience whether we liked the film or not, something inside us was moved by what we saw taking place. This caused us to react in a way we might not normally act when watching a film. In my way of thinking, that is great filmmaking. 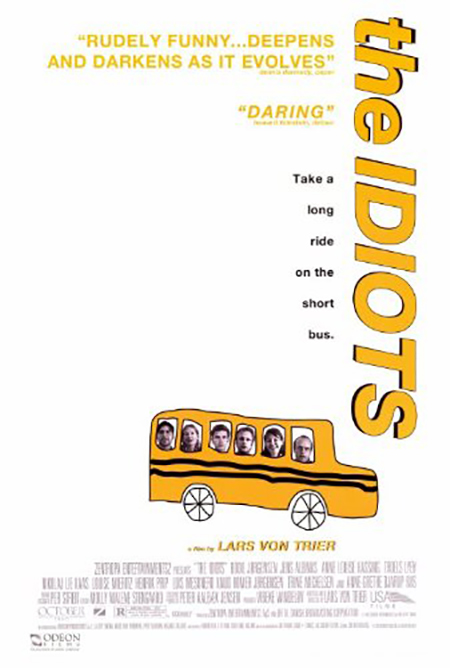