“The rarely seen film, a gem, is loosely based on a 1940 magazine story by Graham Greene.”

Albert Cavalcanti(“Nicholas Nickleby”/”They Made Me a Fugitive”/”Champagne Charlie”) directs this gritty wartime melodrama that imagines the possibility of a quaint country village in England unwittingly taken over by German paratroopers posing as English troops. The rarely seen film, a gem, is loosely based on a 1940 magazine story by Graham Greene called “The Lieutenant Died Last.” It’s a refreshing propaganda film, shot in B/W during wartime, that is assuredly upbeat and cleverly written by Angus McPhail, Diana Morgan and John Dighton.

The quirky sounding title is lifted from a British poem published during World War I and used again in World War II memorials:

Went the day well? We died and never knew. But, well or ill, Freedom, we died for you.

The opening shot is of a 13th-century church’s graveyard in the serene provincial village of Bramley End, where we can clearly see the villagers on a sunny May day are doing their daily routines when a platoon of sixty British soldiers on a few lorries surprisingly enter town and their commander, Major Hammond (Basil Sydney), notifies the elderly local vicar (C.V. France) that his Royal Engineers need to be billeted in the village while undergoing a three-day war exercise to prepare the village for a possible Nazi invasion. The soldiers are politely received and their request is granted without being questioned, and they are billeted in the Village Hall. We soon learn that a local big shot in town, Oliver Wilsford (Leslie Banks), is a German spy and the soldiers are Nazi paratroopers on a mission to jam the radios of the Brits, as Hitler launches his invasion on England.

The vicar’s daughter Nora (Valerie Taylor) suspects something is fishy when she discovers the Major’s chocolate is spelled in German and that the billeted soldiers write numbers in the Continental manner. Things come out in the open after the Germans shoot the vicar for ringing the church bell as an alert of an attack and then round-up almost everyone in town. But a brave little rascal, George (Harry Fowler), sneaks out the bedroom window and makes it into the next town through the paratrooper blockade, and warns them they are under siege. With much bravery, the good citizens of Bramley unite with their Home Guard, returning from a drill in the countryside, to take on the brutal paratroopers, who threatened to kill five of their children the next morning for getting word to the neighboring village of Upton.

This is a first-rate war movie, that doesn’t deserve to be overlooked. 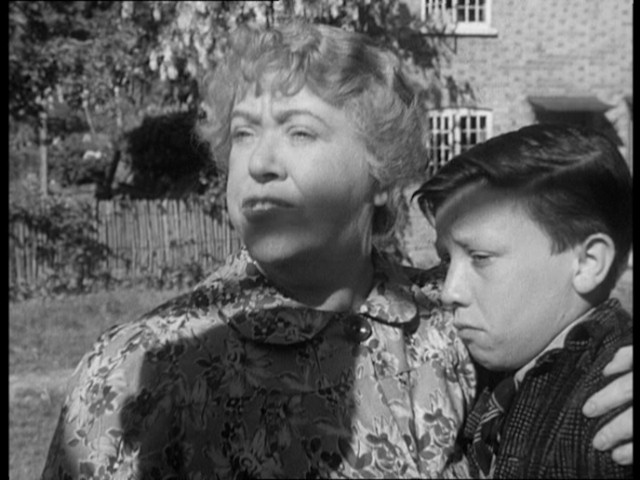