I COULD GO ON SINGING

“Judy Garland’s last film is a must see for her fans.”

Judy Garland’s last film is a must see for her fans. Her death came in 1969, due to an overdose of sleeping pills, when she was only 47. This film is an important one in her career, as it proves she was really a much better actress than most people gave her credit for; in this melodrama she gives, perhaps, her greatest dramatic performance in a demanding role. Judy, unsatisfied with parts of the script, added additional dialogue with co-star Dirk Bogarde, making the story more intimate and intense. The fictional story contains thinly disguised Judy autobiographical material; its sparse dialogue is sharply written by Mayo Simon and is based on a story by Robert Dozier. Former cinematographer, the Britisher Ronald Neame (“Scrooge”/”The Poseidon Adventure”/”Tunes of Glory”), directs in his usual dry and humorless fashion; but this old-fashioned weepy soap opera tale never falters due to his sensitive direction of the actors. The aging poorly and suffering from personal problems volatile and high-strung actress, after her first day of shooting, took an overdose of pills in a suicide attempt and was rushed to a hospital; Judy also during the entire shoot was in constant need of love and reassurances and reportedly was a horror story to work with having a mixture of good Judy and Bad Judy days that threw the filmmakers and filming schedule into turmoil. But when she’s on, Judy was really on and gave a heartwarming performance; she was also in fine form singing a number of standard concert tunes such as “Hello, Bluebird,” “It Never Was You,” “By Myself” and the bittersweet title song.

Jenny Bowman (Judy Garland) is an internationally celebrated American torch singer who is in London to top the billing at the London Palladium. She visits her ex-lover, the Brit doctor David Donne (Dirk Bogarde), on the pretext of having a sore throat but really wishes to reunite with their illegitimate young son Matt (Gregory Phillips). He is raised as an orphan adopted by David and therefore doesn’t know his real father. Jenny, who has never seen her child since giving him up at birth for the stage, nags David to spend a day with Matt and he reluctantly consents. The mother and son bond and she now wishes to be openly part of her son’s life, and seeks child custody. David remarried, but his wife died and he’s left raising Matt on his own, and with the return of Jenny the possibility of his love for her is again rekindled.

The film’s best dramatic moment has Bogarde visiting Garland in the hospital, where the singer with a drinking problem is being treated for a sprained ankle. In this seven minute scene, shot in wide-screen closeup, that was mostly improvised, Bogarde tried to convince her to return to the Palladium stage and her passionate response comes in the form of a real-life candid confessional–with Garland as real as she’s ever been on film.

In this challenging star vehicle, supporting actors Jack Klugman plays Garland’s manager and Aline MacMahon plays her dresser/personal assistant. Bogarde gives his usual solid performance as the stodgy doctor whose heart still flickers for Judy; she plays the difficult to get along with self-centered performer, who gives off self-pitying airs implying that “Nobody understands me.” 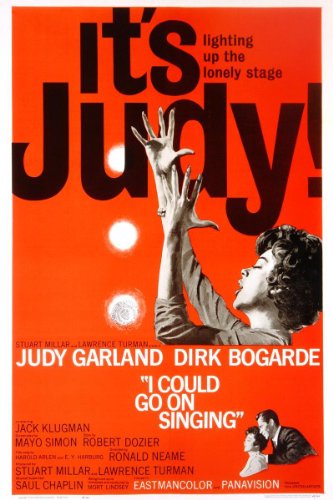