This debut indie film for director Steven Soderbergh is a stimulating but perverse psychological drama. It is set in Baton Rouge, La., and tells the story about four lost souls aged thirtysomething whose problem lies chiefly in their sex lives. The film is invasive sexually, but not in an explicit way. There is no nudity and the film eschews sensationalism for an honest verbal character study. It is more interested in telling about the gulf between what is felt and what is perceived, as the main characters try to articulate what is at the root of their problems. At the Cannes Film Festival this low budget film made for about $1.2 million, deservedly won La Palme D’Or for best film and the best actor award for James Spader.

Ann (MacDowell) is seeing a therapist about her repression problem. She mentions to the therapist that, as of late, she stopped having sex with her successful lawyer husband John (Gallagher), saying she thinks sex is overrated. She further says that she feels repulsed when he touches her. Her immediate concern is that he invited a college friend over, Graham (Spader), whom he hasn’t seen for the last 9 years, and she doesn’t feel she is up to having a visitor at the present time.

Graham appears as a changed person to John for the following reasons: his newly acquired casual dress code; his inexplicable wandering around the country for the last 9 years without a job while living in his car; for being without a woman; and, for having no ambition. What Graham does is videotape women who talk intimately to him about their sexual experiences. He watches them later on in his privacy, getting sexually off on what they say. He also mentions to Ann that he is impotent.

John is a longtime philanderer currently having a torrid sexual affair with Ann’s extroverted sister Cynthia (Laura), who works as a bartender. Cynthia has a strained relationship with her sister, thinking of her disrespectfully as too good to be true and too uptight about life.

Ann is at first repulsed by how strange Graham is, but his words excite her. They both have severe sexual problems to overcome and can’t relate to others as easily as they do to each other. Ann also finds out, to her utter dismay, that John is having an affair with her sister and that he has lied to her about it, which she considers even worse than the affair.

No character is as pure as driven snow or without their psychological hang-ups. But through confronting themselves when forced to listen to the tapes or the lies they get caught in, they view themselves as having lost sight of what is important and try to decide on how to take responsibility for their actions.

This is much more than a voyeuristic film, as everything becomes probing and personal. It stresses the morality needed to live a normal life.

The script is intelligent; the acting is superb; and, the director has elicited spontaneous and natural performances, weaving it into a film where having a conversation about masturbation is as natural as talking about the weather. Sex is always viewed as an intriguing mystery. When the intense Spader videotapes Cynthia, she is completely open about her life and it disturbs her that she can communicate with a stranger but not with her lover. When Spader videotapes Ann, she turns the tables and puts him on camera and the dynamics between the two becomes emotionally charged. It brings them as close to a satisfying climax as they have ever had. She realizes how empty her marriage is when asked by Graham on videotape: “What do you like about your marriage?” And the trophy wife, can only respond “I like the stability and John’s promotion.” The clever story is emotionally satisfying. 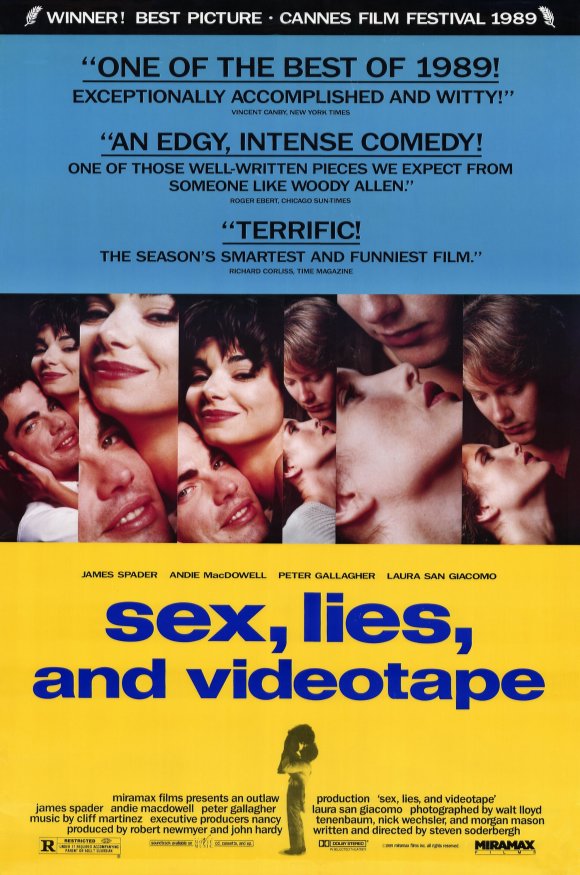