Theater chamber piece efficiently directed and written by Terence Davies (“Distant Voices, Still Lives”/”The Long Day Closes”/”The Neon Bible”). Though setting a wonderful nostalgic mood for the post-war period and that it’s brilliantly performed and written, it still was a suffocating drama about adultery and unfulfilled love that could only make one’s blood rise ever so much as all the main characters are too restrained and repressed to spark more of a response. It’s Davies’ first film since ‘The House of Mirth’ in 2000. The pic is based on the 1952 play by Terence Rattigan, a play that was filmed before to poor reviews by Anatole Litvak and starred Vivien Leigh in 1955. Its theme of trying to figure out what love means moves it alongside the aims attempted by previous strong “woman pictures” like Brief Encounter, Al That Heaven Allows and Letter From an Unknown Woman. The somber mood reminds one of 1940’s “women weepies.” In this delicate old-fashioned portrayal of a love triangle in post-war 1950 London, it becomes one of the struggling heroine trying to figure out why both her marriage for comfort and a passionate affair with a lover didn’t work and left her an emotional wreck.

It opens at night andHester Collyer attempts suicide by swallowing 12 pills, only to be revived by a mysterious tenement neighbor with obviously some experience as a doctor. Hester gave up a life of luxury, entitlement and ease when she opted out of her loveless, childless and sexless marriage with the much older considerate but dull judge, the Solicitor General, Sir William (Simon Russell Beale) and gave up her comfortable lifestyle to live with her same aged troubled and volatile dashing ex-RAF pilot lover Freddie Page (Tom Hiddleston)in squalor in a tiny third-floor flat overlooking bombed buildings still not cleaned-up in the area after the war. Sir William is peeved at her abandonment and in spite refuses to grant her a divorce, while her immature lover is stuck going nowhere (still not over his war experience) and has been neglecting her. That Freddie didn’t even remember her birthday, might be the last straw the neglected woman can handle in this ten month affair. When the chatty Freddie returns from a weekend of golfing, he blows a fuse when he reads her suicide note and goes with a friend to the pub to drink and forget his woes.

Before we get to Hester’s second suicide attempt with gas, in the morning, with the shades opened to let in the sunlight, Hester is rejected by Freddie when he returns from the pub and tells her he took a job in Rio and will be leaving without her. This leaves Hester feeling as if she’s between the devil and the deep blue sea.

The most poignant scenes ask questions about love that gets a measured response from the following: the pompous judge says it’s about finding companionship and living properly; Hester has a more romantic notion, but can’t articulate it; Freddie finds it in sex; while the tenement landlady (Ann Mitchell), married to a bed-ridden husband, offers her opinion that it’s a practical matter and not a romantic notion as she says “You know what real love is? It is wiping someone’s arse . . . and letting them keep their dignity, so you can both go on;” while Hester’s hostile and haughty mother-in-law (Barbara Jefford) clash openly during a house visit and she tells Hester “Beware of passion, it always leads to something ugly. Replace it with a guarded enthusiasm. It’s safer.”

The scenes I felt most satisfied with are a flashback to the war years in London at the underground stop at Aldwych where a group of passenger wait out the bomb attack that shakes the tunnel by singing a rousing chorus version of “Molly Malone” and a flashback to the pub scenes during World War II of the patrons in camaraderie singing “You Belong to Me.”

During all the most tender scenes of the heart, Samuel Barber’s Violin Concerto jerks our emotions by pulling on our heartstrings. 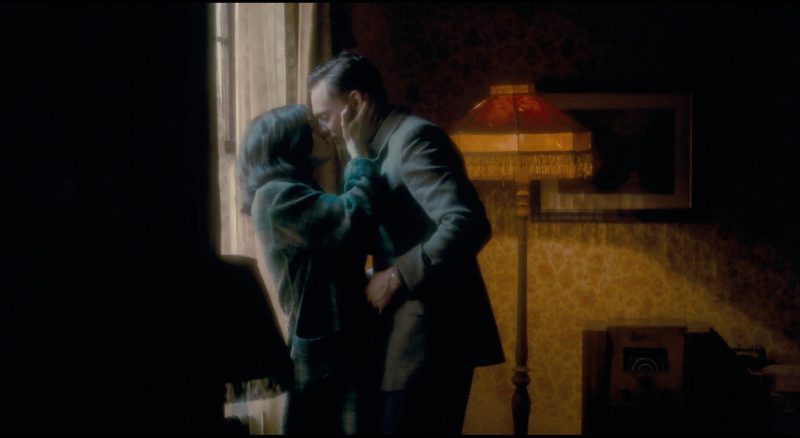