“Spielberg is the master of telling a visual story, and here he is in top form.”

A supposedly accurate historic story of the 1839 revolt by Africans on the slave-ship Amistad and their capture and trial in New Haven, Connecticut. Much of the story involves a court-room drama featuring the slave Cinque (Djimon) who led the revolt. The plight of the slaves was intelligently presented; even though, at times, the film was static and seemed to have no legs to get it going in the direction it wanted to be going. Yet, it still turned out to be a forceful movie.

It is hard to be critical of the stand for morality and piety the film makes; but what saved this picture from being the “holier than thou self-righteous bomb” I thought it might have been, were the presence of John Quincy Adams (Hopkins) and Cinque. Hopkins gave life to the story by his status and ability to articulate. Cinque represented the black man, whose viewpoint was seen through his massive physical strength and pride. He gave authenticity to the events. Without their human emotions: one by his words, the other by his facial expressions and physical stature, the film would not have been as impactful as it was. There could be only so much that one can take from watching the misery of others, until it would become overbearing and defeat all its good intentions.

The exploitation scenes of the slaves being captured by nets in their homeland and then chained on ships and some being thrown overboard to drown, were truly malevolent acts. Thankfully that was kept to a minimal portion of the film’s time. Or else, the film would have been a very difficult one to watch.

For the trial of the slaves, the abolitionists hire a self-promoting real-estate lawyer, Roger Baldwin (Matthew), to take their case. He, at first, does not realize the importance of the case he is taking on, thinking all he has to do is treat it as an ordinary case of a property dispute. But he soon realizes that this is a very important civil liberties case.

Roger presents this question in court: Were they born as slaves–on a plantation, say, in the West Indies– or, as free men in Africa? If it were the later, he would win freedom for his clients because free men are allowed to resist being taken by force, according to the constitution. He eventually gets Cinque to speak through an interpreter and tell the story of his African Mende tribal people. Cinque’s tribe was captured by rival tribesman and sold to an illegal Portuguese slave ship and eventually put aboard another ship, La Amistad, in Havana, Cuba. Cinque also tells of the part he played in the revolt and of his taking over of the ship, and then being tricked by the two surviving Portuguese seamen into taking them to America instead of Africa.

Spielberg is the master of telling a visual story, and here he is in top form. The carnage and cruelty aboard the slave ship are shockingly and revealingly shot, giving one enough of an idea of what the slave had to endure. That gives the film the force and importance that is needed for it to make its moral point. The final moral point is made in front of the Supreme Court with John Quincy Adams saying: “If these men are not set free, you might as well start the Civil War now.” He, then, proceeds to rip up a piece of paper to symbolize the death of the Declaration of Independence. 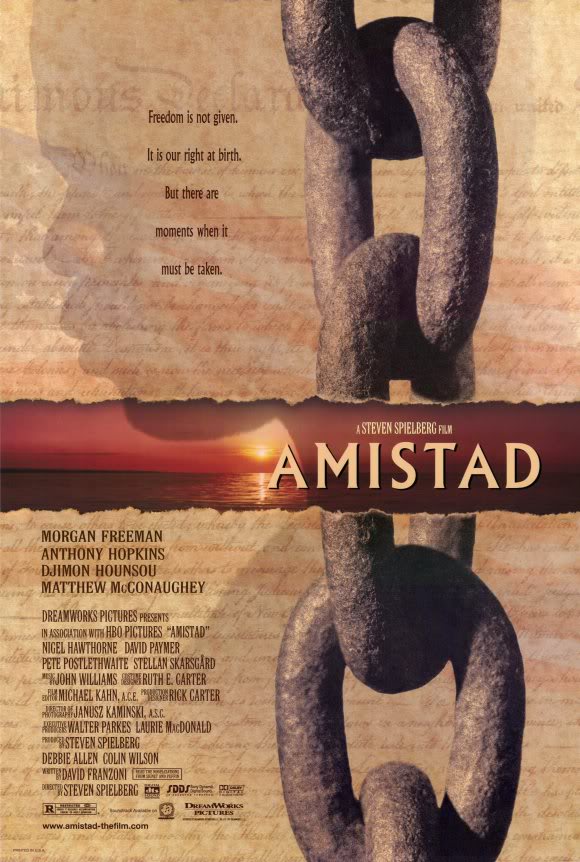