“Its bland star, Ronald Reagan, survived playing second banana to a chimp to become the 40th President of the United States.”

A Dumb sitcom comedy set around the premise that the environment is more important than genetics in raising a child. It’s directed without spark by journeyman filmmaker Frederick De Cordova (“Peggy”/”Katie Did It “/”Here Come the Nelsons”), who is better known as the longtime producer of television’s The Jack Benny Show and The Tonight Show starring Johnny Carson. It’s only lasting claim to fame is that its bland star, Ronald Reagan, survived playing second banana to a chimp to become the 40th President of the United States. It’s Disney-like bad, but not so bad that it doesn’t have some entertainment value for being so cuddly cute–but funny it’s not. The premise for the story came from a real-life study by Yale professor of psychology Robert Yerkes; Ted Berkman developed the story with his writing partner Raphael Blau.

It’s set at Sheridan College, a fictional college in Connecticut, where psychology professor Peter Boyd (Ronald Reagan) and science professor Hans Neumann (Walter Slezak) save recently brought to America from Africa lab baby chimp Bonzo (Peggy) from suicide. This coincides with ex-con Breckenridge informing the college’s dean, Tillinghast (Herbert Heyes), that Professor Boyd’s father was a career con man convict that he shared a prison cell with. This doesn’t sit too well with the genetic-minded dean, since Boyd is engaged to his haughty daughter Valerie (Lucille Barkley). To disprove that criminal tendencies may be hereditary, so that the dean will relent and let his daughter marry him, Boyd decides to raise Bonzo in his home as if he were a human child. This calls for hiring a nursemaid, Jane Linden (Diana Lynn), a pretty maternal single 23-year-old who is attracted to Boyd. The three become a nuclear family with Jane as “momma” and Boyd as “poppa.” Valerie is left in the dark about the experiment, but when she gripes that of late he’s always not available Peter informs her of the experiment. Months later, after a few at home incidents where the police were called, Peter prepares to address the Psychological Society with his findings that Bonzo is now a moral being. At the same time, Dean Tillinghast tells Hans that he has sold Bonzo to Yale’s biomedical research facility. Things take a different turn when Bonzo steals a diamond necklace and Boyd gets the blame until Bonzo is convinced by Jane to return it to the store display window. Everything ends on a happy note when Jane and Peter realize they were meant for each other and tie the knot. We know things are fine with Bonzo because the dean beams with pride that the chimp brought prestige to the small college and there’s a sequel in 1952 called Bonzo Goes to College (directed by De Cordova but without Reagan, Lynn or the original Bonzo, who died in a zoo fire shortly after the film was released). 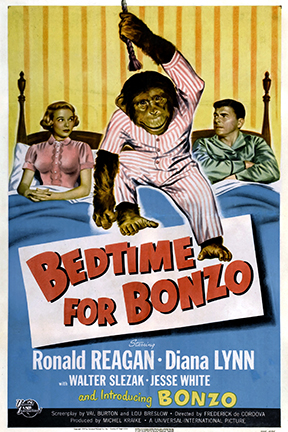