“I guess the big surprise for me was in how well the murder mystery was crafted and so smoothly intertwined with the film’s religious trappings.”

Mormon filmmaker Richard Dutcher (“God’s Army”) is the director, writer, producer, and star of Brigham City, a taut little murder mystery set in a sleepy small Utah Mormon town. It effectively tells an engrossing serial killer tale while it brings religion into play in an authentic way. Dutcher is Brigham City’s upright sheriff Wes Clayton, who wears a leg brace due to a car accident that took the life of his wife and child. The still grieving widower is also a respected bishop in the Church of Jesus Christ of Latter Day Saints. Reporting to his peaceful town’s police station he’s greeted by the hard-working police secretary Carrie Morgan (Peg) and the curmudgeon retired sheriff Stu (Wilford Brimley). He soon responds to a police call at a construction site about a fight and is accompanied by the only other policeman on the force–his handsome new recruit, the recently married young deputy Terry (Matthew A. Brown). The sheriff is not happy with the real estate boom in town, which signals the town is in for some changes. He tells his restless young deputy to appreciate it that no crime wave has so far come to Brigham City, and that he wishes the town always remained the same. No sooner than we see how tranquil everything is – the fight was settled before the police arrived – then the cops discover on the road outside of town an abandoned red car with California plates and the mutilated body of a young woman nearby in a barn.

Wes tries to keep the news from the town by letting the FBI handle it, believing the murder of an outsider doesn’t concern them and in fact will only upset them. There has never been a murder in town before, or so the sheriff thinks. But soon another mutilated body is discovered under a gazebo in the park and she’s the local beauty queen (Gray). The gut-wrenching feeling Wes has is that the innocent town has been dragged into the not so innocent world and there’s nothing he can do but pray for guidance. Stu chips in with the comment: “What we got here is a little paradise” And nothing attracts a serpent like a paradise.”

Working together with FBI agent Meredith (Tavya Patch), the deputized Stu, Peg, and Terry, Wes leads the search for clues by secretly getting the fingerprints off the beer bottles of the bar patrons in the town’s only rowdy spot hoping to see if any of them have any prior felony convictions for violent crimes. When another murder takes place and the young redheaded girl (Simmons) who works in a convenience store is missing, the sheriff gets the entire community involved to do an illegal search of all the homes in town. The FBI agent clues the sheriff in that the young lady reported running away to LA a year or so ago and never heard from again, might actually have been murdered in Brigham. This gets the sheriff thinking in a direction he never pursued before, as he uncovers truths about himself and his community that he can’t deny anymore.

It now becomes obvious the killer is one of their own, and the filmmaker does a good job disguising his identity. All the performances were realistic, the narrative was skillfully told and the main character played by Dutcher is portrayed as a sympathetic one. The sheriff’s someone the audience can relate to even though he’s flawed as a person and a cop, as he’s still looked upon as a compassionate and decent guy–a true believer. The film is unique in the way it so easily interweaves the church Sunday meetings and group prayer sessions in with the murder investigation, and though its aim is to get across its faith-based message the film nevertheless remains entertaining. There’s violence and gore, but the camera turns away from that and leaves it all to the viewer’s imagination. To present its theme about lost innocence and the wicked world it has sheltered itself from, it asks the difficult question: Do we only gain wisdom by losing our innocence? The answer given is taken from the viewpoint of the Book of Mormon.

This lowbudget indie was financed with help from the Mormon community. I guess the big surprise for me was in how well the murder mystery was crafted and so smoothly intertwined with the film’s religious trappings. 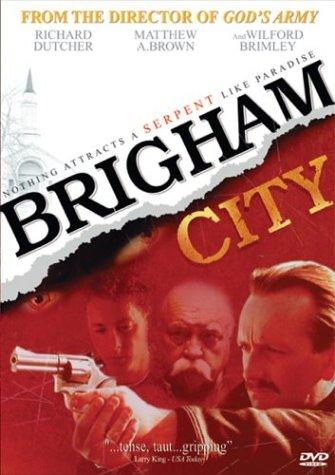