“Even if Van Cleef is a one-dimensional actor, he nevertheless has a tremendous screen presence.”

After costarring with Clint Eastwood in the last two Dollar Italian westerns, this violent spaghetti western, financed in Italy and shot in Spain, gives Lee Van Cleef his first starring role. It’s directed and cowritten by Sergio Sollima (“Revolver”/”Violent City”), based on an original story by the Italian Franco Solinas. Sollima’s film has a political message that revolves around law and order being used as a coverup by unscrupulous businessmen and politicians to protect their own business and political interests.

A tough-minded Texas lawman, without a badge, named Johnny Corbett (Lee Van Cleef ), a former saloon owner and sheriff, has earned a reputation of always getting the wanted criminals he hunts down. Shadowy railroad magnate Brokston (Walter Barnes) invites the popular crime fighter Corbett to his mansion and flashes his wealth and power around by offering to fix it so that Corbett can run for senator and help him secure a lucrative land deal for his railroad. Corbett accepts because he believes in progress and that the railroad will help the state, but he warns Brokston he’s not interested in lining his pockets with money. While there Corbett is asked to hunt down Cuchillo Sanchez (Tomas Milian), a Mexican peasant accused of raping and killing a 12-year-old white girl.

The bandit is easy to track down but proves difficult to bring in, as he heads for safety across the Mexican border. Cuchillo hides out with a Mormon wagon train. He escapes the deputized Corbett, getting the drop on him, when he convinces a startled 13-year-old girl into shooting him in the back by telling her he’s a bandit. Suffering only a flesh wound, Corbett trails Cuchillo to a widow’s ranch. But the lonely widow demands Corbett’s attention in the house and that gets her thuggish ranch hands jealous, and they allow Corbett to escape while they engage the lawman in a gunfight. After disposing of them and snubbing the widow’s offer of some free booty, Corbett captures the Mexican out in the desert. This time the wily wanted man has the lawman believing he was bitten by a snake and again escapes. The two meet up again in the Willow Creek jail, where Cuchillo before he escapes from jail insists he’s innocent–saying he ran away because a powerfully connected white man raped and murdered the girl and he witnessed it, but he’s sure the whites won’t believe him.

It leads to a bloody conclusion and proving that Cuchillo was right about his innocence involving the girl, but he might not be innocent of stealing in order to fund the Mexican Revolution (though that’s never made clear).

The story was muddled, the acting was brutal, and the continuous brutality was cartoonishly made for thrills and entertainment purposes only; its only redeeming worth was that it made some valid points about the justice system (and showed it meant what it said). It should appeal to those who don’t mind how cheesy it all is and that even if Van Cleef is a one-dimensional actor, he nevertheless has a tremendous screen presence. 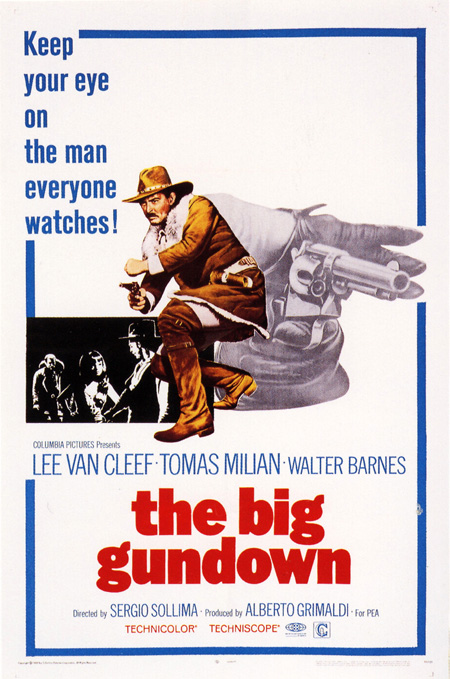