“It can be the poster child film for how a crass Hollywood has the ability to ruin even the best of novels.”

Director George Cukor (“The Philadelphia Story”/”Bhowani Junction”/”My Fair Lady”), with writer Lawrence B. Marcus, picks up where his predecessor Joseph Strick (either fired or quit on his own) left off and tries to do justice to Lawrence Durrell’s unique and brilliant four part novel, the Alexandria Quartet (“Justine,” “Balthazar,” “Mountolive” and “Clea”), as he touches it up on the Hollywood studio sets while awkwardly including Strick’s early on location shoot (shot in Tunisia). Unfortunately, though it looks visually stunning, it comes out too much like a lurid soap opera to be considered anything but a failed effort that misses the essence of the novel, is disjointed, leaden and suffers from its story being too confusing to fully comprehend, which only begins to tell its faults and the difficulties the filmmaker had in trying to compress the four novels into one movie. The result is an astonishingly flat and disappointing movie, as a disapproving Durrell sourly commented that it turned out to be “a sort of Peyton Place with camels.” It hardly seems to carry the weight, purpose or the scope of a novel I found as such a mesmerizing read. It can be the poster child film for how a crass Hollywood has the ability to ruin even the best of novels.

It’s set in 1938 in Alexandria, Egypt, at a time the British ruled but were peacefully exiting to give the Moslem country its independence. The story centers around the intriguing beautiful courtesan Justine (Anouk Aimée), a Jewess married to wealthy banker Nessim Hosnani (John Vernon), a Coptic Christian in a country where they are a distinct minority to the Moslems and worried about their fate when the Moslems take control. Justine holds a tremendous influence over the important people of Alexandria and has many affairs which are approved by her loving husband, who is involved with other bankers in a secretive gun-running scheme to the Jews in Palestine who are trying to kick out their English rulers. In exchange, the Coptics are promised sanctuary in Palestine if things turn rotten as expected under Moslem rule.

The screen time is overburdened with Justine’s many relationships, such as with the likes of a naive young sensitive British school teacher and poet, of Irish descent, Darley (Michael York), in whose eyes the film is viewed; with an elderly Jewish man named Cohen (Jack Albertson), who wanted to give up his wife to be with Justine; with the tortured soul who works in the British embassy, Pursewarden (Dirk Bogarde), who has been the only straight man to reject Justine’s advances because he has another more secretive reason for the rejection.

Anna Karina plays the Greek belly dancer whore Melissa, a kept woman by the furrier Cohen, who knows about the gun-running through Cohen and has the Copts worried that she will spill the beans on them to the Brits. Melissa is also having an affair with Darley, which she wants to be real only he loves Justine more. Robert Forster plays Narouz, Justine’s fanatic hot-tempered brother-in-law living on the desert, dressing as a real Arab and who refuses to go along with the banker’s scheme as he instead wants to arm the Copts to fight off the Moslems.

The story is moodily atmospheric but it’s a hopeless hodgepodge of sexual confusion that goes from adultery, nymphomania, incest, homosexuality, child prostitution, transvestites, sordid romantic yearnings, suicide, political intrigue, police corruption, and religious and nationalistic fervor, without doing justice to any of its dirty little details it unloads on us.

It’s a stylish but exhausting film, feeling more like a B-film than an A-film, that proves to be an inane undertaking, with only Bogarde mouthing his words as if they meant something real. 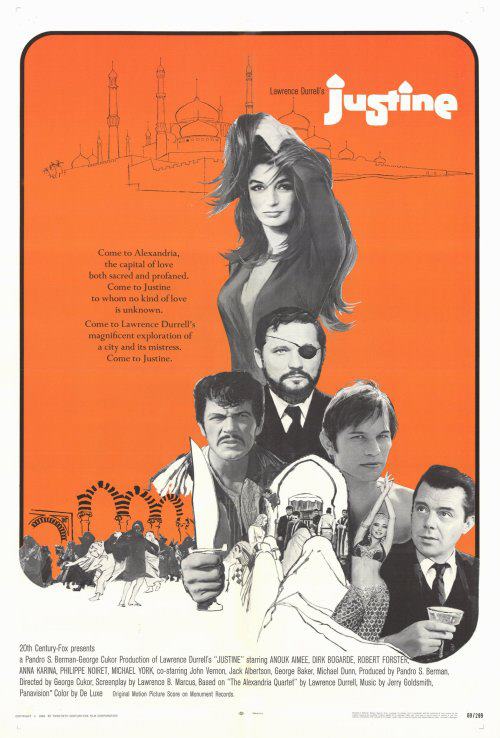