“The story was told in the form of an allegory meant to pull at your heartstrings, as it was not possible to be anything but sympathetic with the victimized father.”

“The Bicycle Thief” is Vittorio De Sica’s masterpiece of Italian neorealism filmmaking (a style of filmmaking founded in Italy and lasting from 1944-1952); the film’s a landmark in cinema history, and its cast of nonprofessional actors do a fine job. A working class father, Antonio Ricci (Maggiorani, in real-life a steelworker), who has been unemployed for a long time and lives in poverty is given a job as a poster-hanger with the condition that he must have a bicycle. The film turns this simple human interest story into a meditation on the collective human condition. It tells a tale about an ordinary family man living in Rome. It was coscripted by Cesare Zavattini, who was a member of the Italian Communist party.

On Antonio’s first day on the job, in the crowded Florida market area, a young man steals his bicycle while he’s on a ladder pasting cinema posters of Rita Hayworth on the wall. He gives chase but can’t catch up with the thief. Antonio thereby comforts his crying wife Maria (Carell), who sold all the family linens so he could redeem from the pawnbroker the bicycle he was forced to sell. Antonio goes with his plucky son Bruno (Staipla) looking all over Rome for the bicycle, a task the police are not willing to do.

It’s a brilliant study of the ruined postwar Italy, as the sharp photography lyrically captures the sad urban landscape.

In Antonio’s first attempt at locating the bicycle he gets the help of his friend Baiocco to look in the markets, but when it rains he deserts him and Antonio continues the search on foot with Bruno. Antonio thinks he has luck when he spots the thief talking with an old man. He can’t catch the thief who speeds away, but he tracks down the old man in a food shelter at the local church. The old man refuses to squeal and will run away from him when he’s distracted. In frustration Antonio slaps his son, who whines that he wants to go home. Realizing he loves his son more than the bicycle, he makes up with his son and takes him to a restaurant where they get cheese bread sticks and he even allows Bruno to have some wine. But they can’t even completely enjoy this pleasure, as at the next table a wealthy family is enjoying a full-course meal. When Bruno stops eating because he sees that the boy at the other table is eating so much and is doing it so properly, the father tells him to finish eating because “To eat like that, you need a million lira a month at least.”

Antonio then goes with Bruno to see a psychic (Altieri) his wife goes to, and he tells her of his problem. She tells him that if he doesn’t get the bicycle by this morning he should forget it, he will never get it. When Antonio leaves her, he spots the bicycle thief and chases him into a brothel. When they are on the street, which is in a rough part of town, a mob friendly to the thief surrounds and threatens him. Bruno brings a cop, but he can do nothing because there is no evidence and only Antonio as a witness.

The film closes when Antonio and his son feel defeated by the world and its injustices, and the temptation is now so great as he’s in a market area where there are so many parked bicycles–that it seems that the easiest thing for him to do is steal one of the bicycles.

De Sica’s grim b/w film is visually stimulating, and it is fully observant of the human condition while being influenced by liberalism, humanism, and Catholicism. What it fails to be, is anything but politically naive. The story was told in the form of an allegory meant to pull at your heartstrings, as it was not possible to be anything but sympathetic with the victimized father. It’s a film about an honest family man who feels ashamed that he can’t support his family through no fault of his — a subject that is universal and timeless, and this stark story is powerful in showing the ordinary man might be drab but he has strong feelings for his family.

It won a special Academy Award in 1949 before the category of best foreign film was created. 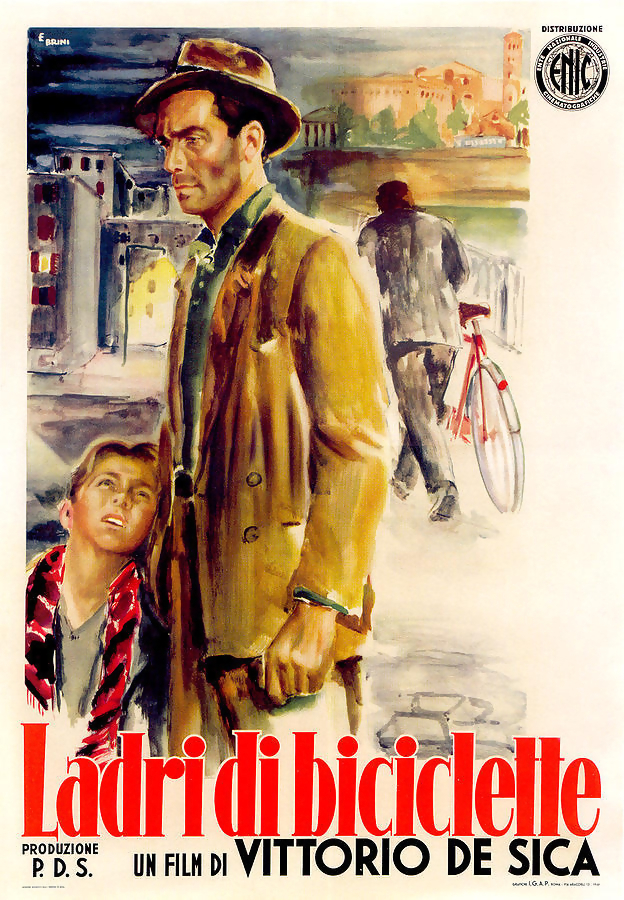