“aesthetically satisfying film about desire being the overriding motive in relationships.”

Korean director-writer Hong Sang-Soo (“Night and Day”/”Hahaha”/”Woman Is the Future of Man“)creates an aesthetically satisfying film about desire being the overriding motive in relationships. Hong Sang-Soo is also concerned about the unbearable burden of loneliness among those not married, how to deal with rejection and the inability of lovers or would-be lovers to communicate.

The thirty-something Seoul resident Gyung-soo (Kim Sang-kyung) is a stage and movie actor whose last picture was a box-office failure, and his company film director refuses to hire him again and bluntly tells him he’s too self-absorbed to care about others.Receiving a cell call from a writer old school friend, Seong-wu (Kim Hak-Sun), he hasn’t seen in a while, the unemployed Gyung-soo accepts his invitation to visit him in the popular country vacation spot of Chuncheon, in Kangwon province. They spend the first night together getting drunk in a bar with loose women. The next day the friends visit by ferry, on Lake Soyang, the tourist spot of the Buddhist temple called the Turning Gate, where legend has it a king in ancient times killed the commoner lover of his princess daughter and the lover was reincarnated into a snake. The snake wrapped himself around the princess and wouldn’t let go, but she escapes into the temple while the snake is left outside in a rainstorm and turns away for good at the place that is now called the Turning Gate.

After the ferry ride, without visiting the Turning Gate, the guest meets the writer’s friend Myung-sook (Yea Ji-Won), a dancer and college freshman, whom Gyung-soo that evening has sex with but can’t tell her that he loves her when she asks. Annoyed with her pushiness that he say he loves her, a restless Gyung-soo takes the train back to Seoul. He feels badly that he wasn’t sensitive enough or made aware of how his friend has a soft spot for the dancer, and thereby unconscionably caused his friend much mental pain. On the train Gyung-soomeets a pretty passenger, Sun-young (Sang-mi Choo), an admirer of his acting. When she gets off at Kyungju, he secretly gets off and follows her home. The next day Gyung-soo shows up at her doorsteps and is greeted with hostility by her family. But Gyung-soo gets her cell number and they spend the afternoon screwing in a hotel, where he learns she met him in Seoul when they were teenagers, something he still can’t recall. He’s also informed that she’s married to a political activist university professor. The next day Gyung-soo talks the 30-year-old Sun-young into having sex with him again, and tells her that he loves her. On a whim the lovers have their fortunes read, whereas Sun-young and her hubby are predicted to have good fortune in the next few years while Gyung-soo‘s fortune is thought to be a doomed one. Afterwards Gyung-soopleads with Sun-young to leave her respectable middle-aged professor husband and run away with him, which she agrees to but never shows up at their meeting spot.Gyung-soo‘s life now imitates the legend of the Turning Gate, as missed chances to find love and rejection and bad karma can lead one to turning their back on the world or of leading an unfulfilled life of constantly searching to make a meaningful connection before reincarnation. 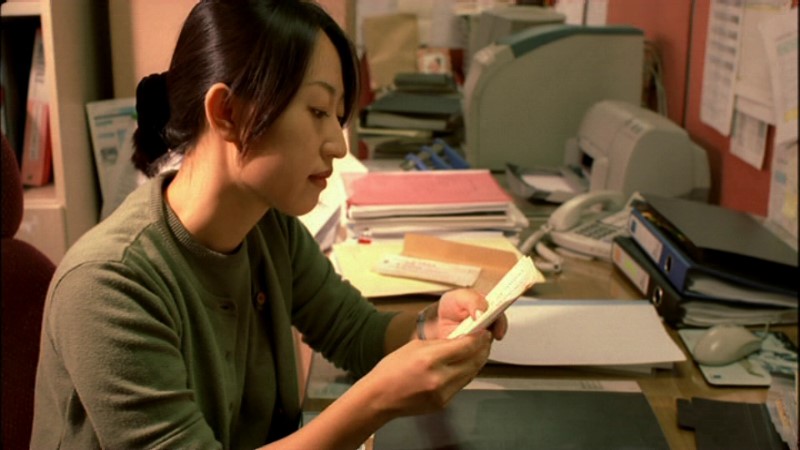