“This intelligent and original film is a prime example of the great films truly indie directors can make and how difficult it is to get these films into theaters.”

This most impressive dramatic character study directed, written and starring Barbara Loden, the wife of Elia Kazan, won the Critics Prize in Venice in 1970. It’s a low-budget grainy film shot in 16mm and blown up to 35mm; it’s set in the Scranton, Pennsylvania, coal area. This was Loden’s first film as director and unfortunately she never made another before dying at the age of 48 of cancer in 1980. This film wasn’t given a chance, as it opened only in one NYC theater upon its release and after the film played a week it was forgotten until discovered at the 1979 Edinburgh Film Festival (where I first saw it, before seeing it again on the American Bravo cable television some years later). It’s about the aimless wanderings of a destitute amoral young woman who is sweet but not too bright or responsible, but despite being a screw up is a sympathetic figure as she futilely searches for security and love.

Wanda (Barbara Loden) is a simple-minded, naive and insecure housewife who hasn’t found her place in the world. We first see her visiting her father who is poking around in a coal field and taking some lumps of coal home. She asks him for some money and he spares her the little he has and she catches a bus to appear in court for her divorce hearing. Still wearing hair-curlers, she tells the judge that she pleads no contest in the divorce brought by her husband and willingly grants her hubby custody of their two youngsters–saying they are better off with him and his girlfriend. Hubby accused her of deserting them and being a bad mother, idly lying around the house smoking and drinking.

Leaving the court she returns to a dress factory where she worked for two days and is told by the boss he doesn’t need her any more because she’s a slow sewer. She then goes into a dumpy bar where a traveling salesman picks her up and after shacking up with her overnight in a dumpy hotel, ditches her. She wanders around the mall and takes in a movie in one of those old-fashioned local movie houses still existing in that era. She falls asleep and wakes up when the theater is closing to discovers her pocketbook has been rifled through and the little money she had has been stolen. Wanda goes to a nearby bar to use the ladies room and doesn’t even realize she walked in while a robbery is in progress, and the gruff robber Mr. Dennis (Michael Higgins) orders her around when he sees he can’t get rid of her. The robber has left the bartender gagged and tied up under the counter, which she fails to notice. When they leave the robber treats her to a spaghetti meal in a cheap diner and the two then shack up in a nearby hotel. When Mr. Dennis makes her read to him the newspaper account of the bar robbery the next morning, even Wanda comes to realize he’s the stickup man. The small-time bossy crook has anger-management problems and repeatedly yells at her, but she sticks with him. When he plans to rob a bank, she balks. But he builds up her confidence that she can do it and they take the manager of the Third National Bank, Mr. Anderson, hostage in his home and tie up his family threatening to kill them with a timing bomb if he fails to cooperate. The incompetent bank robber doesn’t realize that when he makes Anderson open the vault, the alarm goes off in the police station. Rather than surrender, Mr. Dennis gets killed by the police as he tries to shoot it out with them. Meanwhile Wanda, who is driving the getaway car, gets lost and is stopped by a police officer and asked to show her registration. The cop gives her a warning and directions to get to the bank. She arrives after Mr. Dennis is killed and wanders off in a fog, ending up in a seedy bar getting picked up by a soldier and running away from him after he tries to force himself on her in his car. She will end up the next night in a roadhouse bar drinking with a new group of acquaintances and the film ends with a freeze frame shot of her contorted unhappy look–the first time we see how much her messy life is getting to her (which could also be because she blames herself for botching the robbery by arriving late and still doesn’t understand that her man was nothing but a loser bully who could not offer her real love and would only further her poor opinions of herself as he’s too lost to acknowledge his failures, in-competencies and lack of character).

This intelligent and original film is a prime example of the great films truly indie directors can make and how difficult it is to get these films into theaters, as the studio bosses instead peddle to the country inferior films under the weak excuse that those are the kind of films the public prefers. 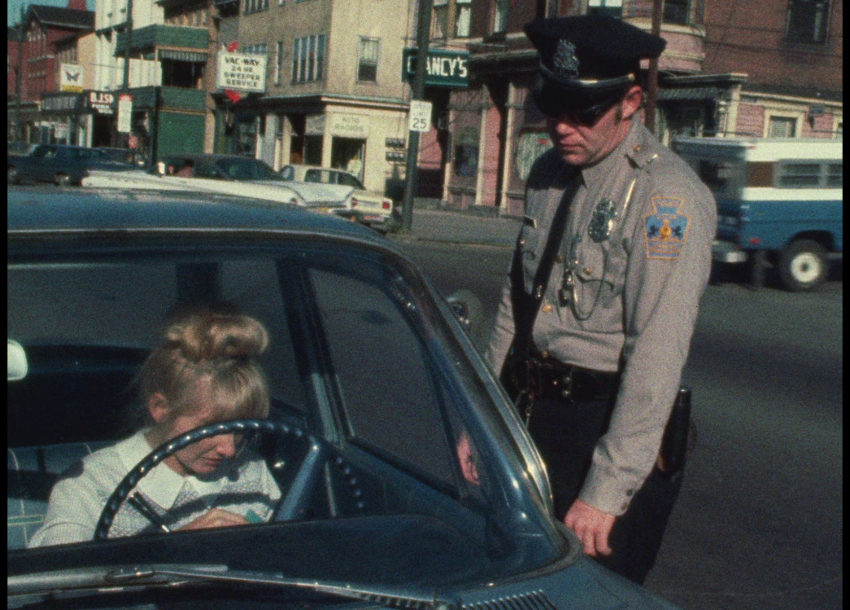