“Trintignant gives a mesmerizing performance as someone wrestling with his inner demons.”

Bernardo Bertolucci’s (“The Spider’s Strategem”) fifth feature is his breakthrough film and passport to international acclaim. It’s based on the novel by Alberto Moravia. Bertolucci examines the relationship between sex and politics in this period piece about fascism in Mussolini’s Italy of 1938.

Jean-Louis Trintignant plays the professorial Marcello Clerici; he’s a conformist who strives only for normality and volunteers to become a collaborator with the secret police. His superior, referred to as the Colonel, assigns him a mission to set up the political assassination of his former leftist philosopher college professor, Quadri (Enzo Tarascio), who is living in exile in Paris. The professor has become the leader of an anti-fascist group and he cannot be penetrated except by someone who knows him. The film veers back and forth between the troubled Marcello’s present state, as he’s on his honeymoon with his obnoxious petty bourgeois wife Giulia (Stefania Sandrelli) and at the same time lusting after the professor’s hot young wife Ana (Dominique Sanda), and flashbacks to his past such as his haunting homosexual experience as a child with his chauffeur Lino. The psychological trappings from Moravia’s novel are all but stripped away, except for the traumatic childhood scene where Marcello believes he murdered his predatory chauffeur. What we get is a confused film noir-like protagonist who is willing to sell himself out to the state because they are the ruling party and could give him sanctuary in their bosom. The search for a normal life is what motivates the grim Marcello through his muddled state of mind, as he takes us on an historical and personal journey into a dark time.

The visuals by cinematographer Vittorio Storaro are stunning and include: a car ride through the snowy Italian and French forests, where the bloody assassination of Quadri and his wife is messily accomplished; a visit to see Marcello’s incarcerated dad in a sterile white marbled insane asylum (suggesting an Oedipal conflict); a Paris dance hall scene where Giulia is seduced by the radicalized ballet teacher Ana to dance together; a visit to his mom’s rundown estate (showing a hatred he has for his mom’s decadence and morphine addiction); and the walk under the Rome bridge at the brink of the Fascist downfall, where Marcello walks hand-in-hand with the fascist propagandist blind poet Italo, the one who introduced him to the Colonel, and gets jolted back to the realization that there’s no such thing as normality.

The most beastly words are spoken by the special agent assigned to help Marcello in the political assassination, who laments after Marcello doesn’t have enough nerve to kill Ana: “I can’t stand cowards, homosexuals and Jews. They all should be eliminated when born.”

The Conformist is told in a flowery style, one where Bertolucci conveys his thoughts mainly through mood (a brooding Marcello) and visuals (those monumental fascist architecture structures and those workplaces of authority that contain labyrinths of towering corridors that make visitors seem insignificant). Trintignant gives a mesmerizing performance as someone wrestling with his inner demons, someone who has slid into a dark abyss and has miserably spent a lifetime of searching to find only emptiness. 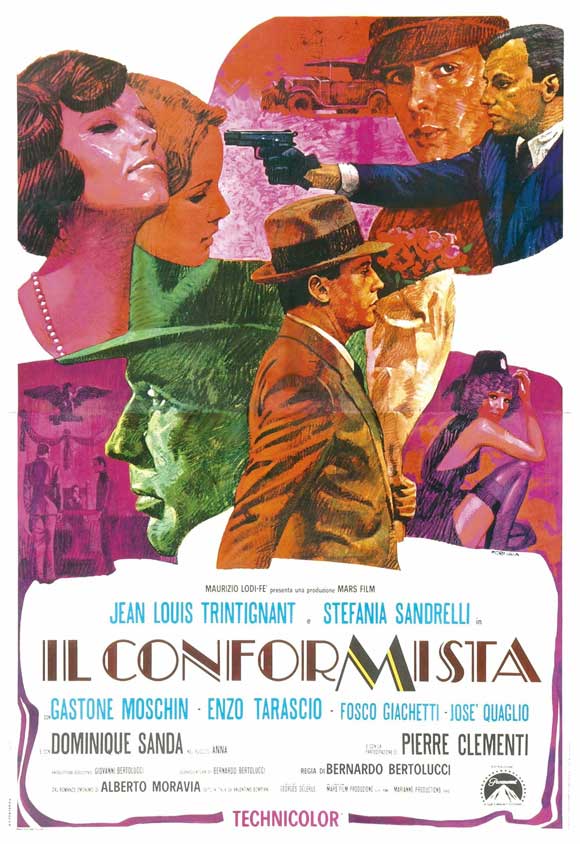