Darren Aronofsky (“Pi”/”Black Swan”) is the writer and director of this insufferable dark mystical allegorical thriller about creating art and the price that must be paid, that takes us on a long strange trip to a dream world that makes us feel uncomfortable. It’s structured like Rosemary’s Baby, giving off a smart European arthouse look along with an inexplicable plot. The bold film can be admired for being so different from today’s horror films, but it’s also a heavy-going psychological domestic discord film with supernatural undertones and too many scenes that are absurd, and it concludes with an over-the-top apocalyptic mob scene that offers the director’s sharpest comments on religion.

The film opens with a woman being burned alive (Jennifer Lawrence, the older director’s current gf), who in the credits is called Mother, as a man (Javier Bardem) looks at her burning and does not go to her aid. Through movie magic the burning house is restored in the next scene and the same character who was on fire, Mother, tosses in bed and calls out to the older man, a famous poet, who was just watching her burn. It’s learned that they are a childless married couple, living in his stately childhood Victorian mansion, being restored solely by her while the tortured artist is trying to recover from writer’s block and is using all his energy to get in the mood to make art again. The mansion is located somewhere in the country, in a remote place. Therefore when there’s a knock on the door, Mother is taken aback to see at the door a stranger (Ed Harris), a retired doctor and fan of the poet who is invited by her husband to stay as long as he wants to. The next intruder is the doctor’s crass wife (Michelle Pfeiffer), asking Mother pointed personal questions about her sex life, who makes herself at home in Mother’s place and has no intention of leaving or to stop snooping around even when asked not to. The next intruders are the couple’s quarrelsome young adult children (Brian and Domhnall Gleeson), who are irate over seeing their dying dad’s will and begin a deadly bloody fight that messes up the house. From here on events grow increasingly weirder, as there are more unruly fanboy intruders from hell and the husband becomes more suspect of using his innocent wife as his muse as he acts shifty and shows a complete disregard for his wife’s discomfort. The charming cad treats all the intruders with a greater generosity than can be imagined and ignores his nurturing wife’s pleas to throw them out. Meanwhile the house induces strange visions and logic is no longer the norm that the couple live by. While Mother experiences all kinds of horrors, things spiral out of control in an attempt to drive her insane. Violence, rage, destruction and bewilderment set the tone in the enigmatic setting, where Mother becomes pregnant and in this joyous event she will suffer greater physical and psychological tortures than before. It’s a thought provoking but dizzying film about art super-ceding life. Too bad it’s filled with so much tedium and despair that it makes us still squirm with unease and disbelief at its spellbinding unforgettable conclusion even when it leaves us with a positive but arcane message that through an obsession for art, love and human bonding can occur.

It wants us to believe that there’s hope that humanity through art will find a path to conquer evil, but its message is delivered in a film that doesn’t completely work for me at this time because it’s so mind-blowing. 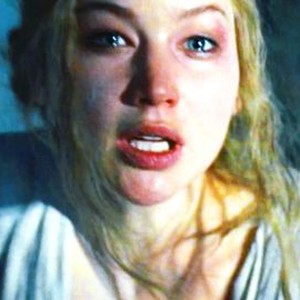 MAN WITHOUT A STAR