“Brought ‘horror film’ made to order goose bumps to me.”

Two sisters, the aggressive Su-mi-Janghwa and the withdrawn Su-yeon-Hongryeon, after spending time in a mental institution after the death of their mother, return to the isolated country home of their unemotional father Moo-hyeon and cruel stepmother Eun-joo. They never get along with their stepmother and become obsessed with their menstrual cycles, their adolescent fears, an interfering ghost of their mother that haunts them and Su-mi’s unbalanced acts to protect her weaker sister from the stepmother’s cruelty. Their ineffectual elderly doctor father is clueless in how to make this a unified and happy family, as he’s pulled in the opposing direction of love for his children or love for his porcelain-like beautiful wife– loving both but not understanding or able to emotionally reach either.

Kim sticks to the usual horror conventions, mixing in scary figments of the imagination with enough reality to keep the viewer in a fog. The filmmaker never tells us quite enough to know exactly what’s going down, but keeps us occupied with a stylishly visual feast of colors that blend tonally into the suggestive scenes of nightmares, madness and doom. Everything that appears is not what it seems, but it’s beautiful to look at. The gothic tale makes the wicked stepmother an icy young beauty (instead of the usual old hag), who may or may not be responsible for the death of the twin’s mother.

The film caught my interest for its excellent craftsmanship and its ability to be ultra-creepy by blurring the boundaries of the dream world from the real world. Despite things never getting cleared up in a convincingly satisfactory way — the twisty ending seemed tacked on as a concession to at least some clarity — it nevertheless brought ‘horror film’ made to order goose bumps to me (especially the haunting scenes over possible secrets in the dark closet, under the kitchen sink and between the legs of a sister having a monstrous period). It was an arty effort that left me somewhat dazed with a sense of the macabre without it going over the top as a lesser film would have. 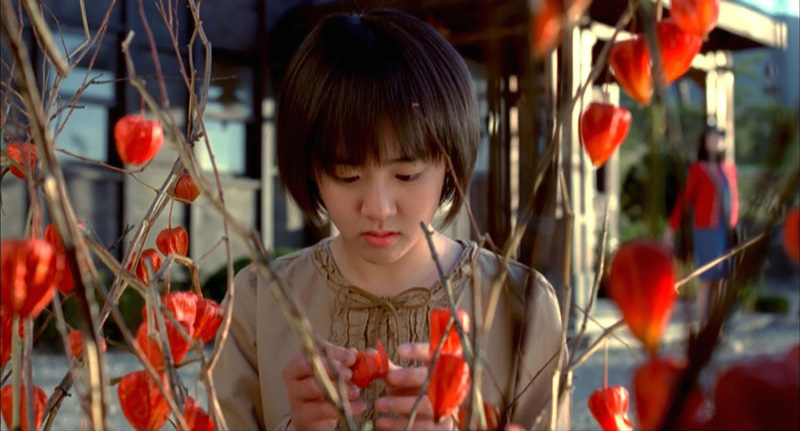 IN PRAISE OF LOVE

LANDSCAPE IN THE MIST