A fantasy sword-and-sorcery epic set in the 13th-century of Italy. It is the story of the rise and fall of a corrupt monarch, King Sedemondo of Kindaor (Gino Cervi). It was completed just as the United States was about to enter WW 11 against Italy, and therefore it wasn’t seen in America until some eight years later. The Iron Crown was a first-prize winner at the Venice Film Festival, and received good reviews when shown in America. The director, Alessandro Blasetti, was famous at the time, but has since fallen out of favor. He was a fascist, but in this film it shows he was becoming disheartened with those beliefs and the film’s message is a call for world peace. It was a high-budget film with expensive sets and was shot in the same studio where Elizabeth Taylor did Cleopatra.

The film opens with a voiceover explaining that the emperor of the Byzantine has presented the pope with the gift of the Iron Crown. It is made from a nail out of the Cross of Christ and the metal of Roman swords, and is a legend and a symbol of justice.

The legitimate king, who is taking the crown back to Italy, is slain by his brother, Sedemondo, who doesn’t want to forgive his enemies and instead wants to take power for himself and keep the Iron Crown. An old woman (Rina Morelli), who is a seer, tells him that his wife gave birth to a girl and his dead brother Licinio’s wife gave birth to a son. Knowing that the king wanted a son, his wife switches babies. The king at first thinks the seer was wrong, but finds out the truth when the boy, Arminio (Massimo Girotti), berates him for being cruel when he rips out the eyes of a bird because it makes the bird sing better. The little girl Elsa (Elisa Cegani) is imprisoned behind locked gates for twenty years, while Arminio is banished to the Valley of Lions — as he’s brought there by a slave. The slave who brought him there is slain, and therefore the king doesn’t know where the boy was placed. Before the banishment of both, they each received a permanent scar on their arms as they were whipped.

Elsa now has a chance to be free as the king, on her twentieth birthday, sets up a tournament for the winner to take her hand in marriage.

The old woman in her prophecy says the fates will work against the corrupt king and he will lose his kingdom, and that Elsa will not marry. She will make prophecies throughout the film, that all turn out to be correct no matter what the king does.

The leader of the slaves is a woman called Tundra (Luisa Ferida), who escaped from the king with a number of other slaves to form a revengeful army. She fails to listen to the old woman’s prophecy about turning her cruel eyes into kind eyes, and is therefore stopped in her attempts to get revenge on the king. But she meets the grown up Arminio who still doesn’t know who he really is, and they fall in love and form an alliance. He enters the tournament and beats the best fighter there, Eriberto (Valenti). The king accepts him to marry Elsa and then Arminio foils Tundra’s plans by agreeing to go through with the marriage. All the main characters have dreams that make them act strangely. When all the secrets are revealed and Elsa is sacrificed for peace, Arminio marries Tundra and they become the rightful heirs to the Iron Crown.

This was a heavy-handed, overblown epic, that is too loud and too hammy. It looks like the fascist art of the time, which emphasized the wonders of nature and eulogized those who were physically fit. That Massimo Girotti must have thought himself quite a physical specimen as he thumps his chest at his athletic prowess, but is more comical than imposing. He’s no Buster Crabbe as far as muscles go and this film’s director is no Cecil B. De Mille as far as making an entertaining epic goes. 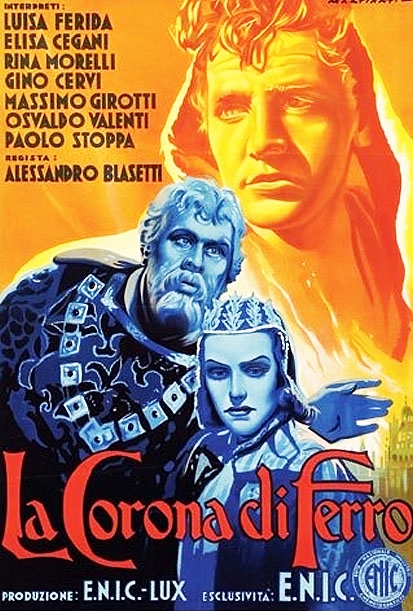