“This Buster Keaton wannabe movie is supposedly a comedy/romance about an inept, morose Oslo mailman.”

As if Roy’s poor work performance is not bad enough, he is also a voyeur. Roy finds the keys to a deaf (she wears a hearing aid) woman’s apartment that she left in the mailbox, and uses the key to enter her apartment when she is working at her dry cleaning job. Roy goes through her things and steals a photograph of her. It seems he finds her attractive, but doesn’t know how to get to tell her this. She is played by Andrine Saether (Line).

This film is noted for showing the slum side to beautiful Oslo, where we see crime, ugly buildings, and problems outsiders do not normally associate with this peaceful and scenic country.

In one incident Roy is robbed of his mailbag, but his strap gets caught and he can’t even get robbed properly. Later on saying he would have gladly given up the bag and avoided the beating the three muggers gave him, that hospitalized him and made him out to be a postal hero for not wanting to give up the bag. The film spends most of the first half of the movie showing Roy to be a screw up. Everything Roy touches he fouls up; he is a complete loser — and there is a long tradition of Hollywood comedians who have exploited that avenue of comedy. His comic effect is induced by his deadpan expression, that absorbs all criticism that comes his way. Roy’s fellow postal workers rag him about what he is good for, which is nothing. A lady postal worker who wants to stick up for him can only say that he is a good walker, which causes a round of snickers from the postal workers ragging him. What is funny is the way he looks at the camera, showing us his hurt feelings and pathetic nature.

But the picture has darker ulterior motives than that in mind, it will chuck out all the work it did setting-up the film as a fluff comedy piece and go for the criminal aspects to the story. This is a decision that has to change how we approach the film. We can no longer be content to relax, laughing at this inept mailman.

The director, also, tries to bring romance into the story, as another subplot.

The romance comes in a surprising way. Roy is trapped in Line’s apartment when she comes home unexpectedly and he watches her in the nude as she goes to take a bath, but what Line’s really doing is committing suicide. Roy saves Line by reviving her and calling for an ambulance, leaving the house before she knows that it was him who saved her. From there on, Roy takes an active interest in her.

It becomes disclosed that Line is involved with a strong-arm thug, Georg (Per), who beat a security guard senseless in a robbery and gave Line the money to hold.

Junk Mail loses track of what it is best capable of doing at this point. One contrived situation after another occurs trying to keep the story suspenseful. The buffoon-like Georg starts menacing Roy. Roy is now the subject of a film that doesn’t know if it wants to be viewed as a suspense or as a romance yarn, or even as a comedy. Roy still acts with the same deadpan expression, as a result everything becomes muddled. The laughs seem forced, the romance absurd, and the suspense unreal.

At best, I found this film to be a modest effort, with comedy the vehicle that works best. 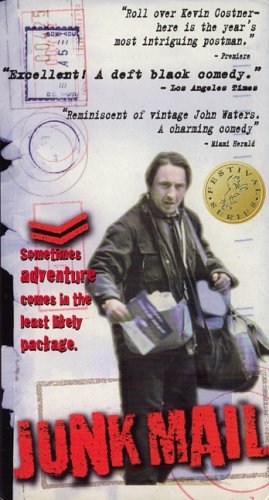