A heavy-handed social conscience film, where every character is a stereotype. It’s a hard film to stomach because of its awkward way of delivering its message of racial tolerance. The film is set in Pickley, a small agricultural town in California. “The Last Best Sunday” climaxes on a Sunday, after a murder and an interracial romance begins on Saturday night. This is director Don Most’s debut feature film (he played Ralph Malf on the sit-com Happy Days).

Mr. Most picked a weak melodrama and an underwritten story to start his directing career.

Joseph (Spain) is a Mexican-American, whose parents are migrant fruit pickers. They go to another town to work, while he stays behind to graduate from high school. Joseph takes a dishwasher’s job in a bar run by a biker bigot, and on Saturday night two drunken white patrons beat him up savagely and rape him. When the yokels return to the bar, Joseph goes for retribution and takes their shotgun and kills them and wounds the bartender who tries to help the thugs. Joseph’s wounded in the leg and flees the scene in a panic and ends up in a house he thought was empty. High school coed Lolly (Bettis) is home alone this weekend because her folks are visiting a near-by town. She is sexually repressed and passionately hates her parents. Her father is a Christian fundamentalist minister who is disappointed he didn’t have a son and treats Lolly as if she were a harlot, while her overbearing mother is a bible-quoting monster who constantly threatens her with eternal damnation. The girl is tired of being told that she’s going to hell for doing infractions she is not even aware of.

Once Lolly overcomes her initial distrust of the Hispanic intruder, she doesn’t want him to leave town without her. She plays house with him, bandages him up, and the two exchange life stories. These two are about as dull a couple as you can get. Finally, Joseph asks the virgin “Do you want to make love?” Lolly responds: “I’ll get back to you on that.”

The bigot sheriff, Bob Weaks (Lucking), who has been in office for the last 25 years has lost the election because of the migrant vote and on Monday the new sheriff takes over. Weaks feels that it’s his last duty to get the Hispanic killer, and pursues a vigorous search of the area.

After Joseph and Lolly make love and talk in a mushy romantic way, Lolly decides to runaway with him. When her mother’s busy body friend comes over to check on her the two teens tie her up, while Lolly curses her out for being a Christian bigot. They steal her car, and before they can get out of the county the Sheriff corners them and this film mercifully comes to an end with Joseph’s truck going up in flames with him inside it. But this is not before Lolly had the chance to tell Joseph: “Thank you, for letting me love you.”

This is a well-intentioned but contrived melodrama about intolerance, that suffers from an awkward script. This film was made to go either straight to video or to hell. 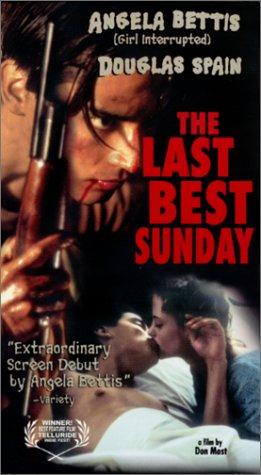