“This is arguably Bill Murray’s best role yet.”

This is a fantasy film that comically depicts one current student making contact with another former student of the same school. One of them is a tycoon, the other wants to be one. It’s a film that looks back at one’s high school days so that an alumnus might recall what it was about those years that now fills him with nostalgia.

Rushmore opens as an irrepressible sophomore at an elite private school, the 15-year-old Max Fischer (Schwartzman), who is the future tycoon, is daydreaming that he can solve an impossible math problem his math teacher put on the board for extra-credit that no one else in the world can solve. In reality he is a poor academic student having won a scholarship to the school when he was in the 2nd grade, by staging a play that the headmaster (Brian Cox) of Rushmore Academy was impressed with. His father is the town barber, but Max prefers to tell people that his father is a neurosurgeon. The father is charmingly played by veteran actor Seymour Cassel.

This is an original and quirky story. It follows a long tradition of films that took similar routes (Ferris Bueller’s Day Off, The Graduate).

Max appears with thick spectacles, wearing braces, and is not appealing to girls or not even liked by anyone on campus except for a young student whom he is an advisor to, Dirk (Mason). Dirk acts as a loyal subject to Max’s cause. He is only disillusioned when he hears that Max made some sexually disparaging remarks about his mother. Max is not so much a nerd as he is pushy. He is neither completely likable nor obnoxious. He propels himself into the Rushmore scene by pursuing extra-curricular activities to such a degree that it reaches the point of absurdity. He is involved in so many diverse activities, that it is a wonder he has time to even take off the preppy blazer he loves to wear around the campus. The list of his activities includes: Beekeepers Club, The Dodgeball Society, The French Club, The Debating Team, The Fencing Team, Editor of the school’s paper, The Piper Cub Club, and The Max Fischer Players — they put on plays, which seem ridiculously overplayed. The Serpico one is prime example of such a play in which he directs and stars in, and ruins by making it hammy.

Rushmore is Max’s symbolic place, tantamount to that august mountain top where some of the greatest presidents have their images carved in stone. It is at Rushmore where he is bursting with untold energy for adventure, entrepreneurship, and romance. Everything he does is what someone his age might want to do or dream about, but he carries it out from fantasy land into the real world and is not deterred by what others may think of him. He’s oblivious to his poor school work except when the headmaster reminds him that if he doesn’t improve his grades he will be expelled from school, scholarship or not.

Max falls foolishly in love with a 25-year-old elementary teacher at the school, charmingly played by Miss Cross (Williams). She looks bemusedly perplexed at him but, nevertheless, somehow admires him for the effort he puts forth in stating his feelings for her. Her husband recently died but spoke fondly of his attending Rushmore, which is the reason she chose for coming here to teach. Max plans to win her over by building her an aquarium, as a token of his affection. The money for this project will come from a steel tycoon, Herman Blume (Murray), whom he met after the former graduate of the school gave a speech that seemed to only impress him. The tycoon told what the school meant to him in a flippant way, a way that alumni usually don’t reminisce about their alma mater when giving a formal speech in an auditorium.

Blume, as the present day tycoon, is looking back at his days at Rushmore with fondness. He sees it as being the springboard of his success, just as he looks back at his marriage with remorse. He develops a natural kinship with Max, the tycoon-in-waiting. This is beautifully presented by an understated performance by Murray, who draws comedy by just raising an eyebrow at the right moment or when befuddled lighting two cigarettes in his mouth. He evinces pathos when he seems inundated by his dislike of himself for the unfeeling person he has become.

There are many twists to come into play as the story is disarmingly told, forcing us not to get too comfortable in what to expect. The twist that works best — that is both hilarious and deadly serious — is that Blume, trapped in a loveless marriage, falls for the teacher, also. This upsets Max, who reacts by venting out at all the parties he perceives are hurting him. These scenes were wickedly cruel, as the story flipped over from comedy to psychological drama. It was this facet of the story that was most novel and daring about the film, as it let the characters freely play out who they were without any contrivances. Therefore, even if you didn’t particularly care about the way things were going, you were at least taken aback by seeing how everyone interacted with each other. Max by showing himself to be rude and insulting, going to great lengths to end the relationship between the two adult lovers. Blume by smashing the kid’s bike in retaliation for his interference. Max getting back at Blume by cutting the brakes to his Bentley. The one caught in the middle, Miss Cross, reacted by showing that she’s a sensitive and vulnerable woman who wants to feel alive and romantic and doesn’t really understood that she is being wooed by “men” who can’t take no for an answer. This is the part of the film that I had the most problems with, especially when we see her going out with an attractive doctor (Luke), a Harvard graduate; and, he seems to be the odd man out for no decipherable reason that the story expands on.

When Max gets kicked out of Rushmore and goes to the inferior public high school, he continues to do poorly in his school work but will excel once again in extra-curricular activities. He puts on an anti-Vietnam War play with live ammo, requiring the audience to put on earplugs and wear goggles. He even finds an Oriental girlfriend (Tanaka) who is not quite the scientist she seems to be, which in this case is a good thing because that makes her just about right for Max.

The young director’s previous film, Bottle Rocket, was cowritten by him and Owen Wilson. It was also quirky but a bit less professionally done. Both films show promise of better things to come. There are still patches to this story that need further repair; but, after saying that, I must say that this is still a first-rate film. It depicts characters in a discrete way that allows them to be very real and formidable. This is arguably Bill Murray’s best role yet; and, for newcomer, Jason Schwartzman, the son of actress Talia Shire, a role made for him in filmdom heaven. 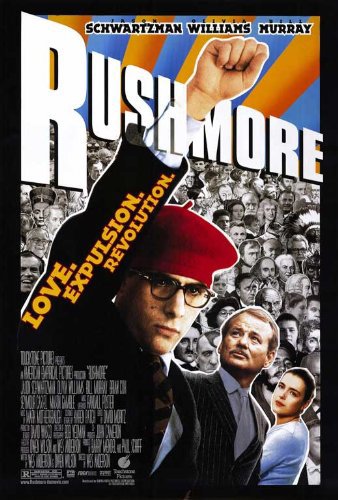