“Despite its absurd storyline, it’s a surprisingly entertaining film that won’t deaden your brain cells even if it’s a trashy B film sci-fier.”

A Hammer entry, one of their better efforts, is a gloomy hokum sci-fi thriller about a mysterious radioactive force that erupts in the Scottish highlands and becomes a creeping mass of mud taking on any shape or size. It sets the panicky scene by focusing on the fearful Brit attitude about the cold war and the possibility of a nuclear attack in the 1950s. Initially directed by Joseph Losey, but he bowed out early on supposedly due to an illness and was replaced by Leslie Norman. The real reason the blacklisted exiled American Losey left the film was because right-wing star Dean Jagger refused to work with a commie fink. Jimmy Sangster handles the screenplay, the first of many he did for Hammer. Gerald Gibbs does an excellent job in photographing in a dark monochrome, that plays well with the understated hysteria desired by the filmmakers. It came just after The Quartermass Experiment found favor with the public, and follows the same formula. Two years later The Blob was similar but though less intelligently conceived profited more by having a more dynamic actor in Steve McQueen be the lead rather than an unemotional Dean Jagger.

The story begins with Brit commandos on maneuvers in Scotland’s moors attacked by the unseen mud and returning with mysterious burns on their bodies. The authorities call in atomic scientist Dr. Adam Royston (Dean Jagger), and he’s visited by police Inspector McGill (Leo McKern) and asked to save the day before the radiation thing destroys the world. There will be other casualties caused by the monster that include a child going into the marsh and dying from radiation burns, two soldiers on guard duty at the monster sighting in the marsh succumbing to radiation, a doctor in a nearby hospital done in when the monster creeps into his lab room through a vent and some civilians melted down in their cars. Royston’s laughable explanation is that the monster, living in a fissure in the marsh, was dormant for fifty years but since radioactivity is more prevalent in today’s society it has food to feed on to sustain its life.

Despite its absurd storyline, it’s a surprisingly entertaining film that won’t deaden your brain cells even if it’s a trashy B film sci-fier. The special effects are certainly not up to modern speed, but for its time it serves the low-budget film well. 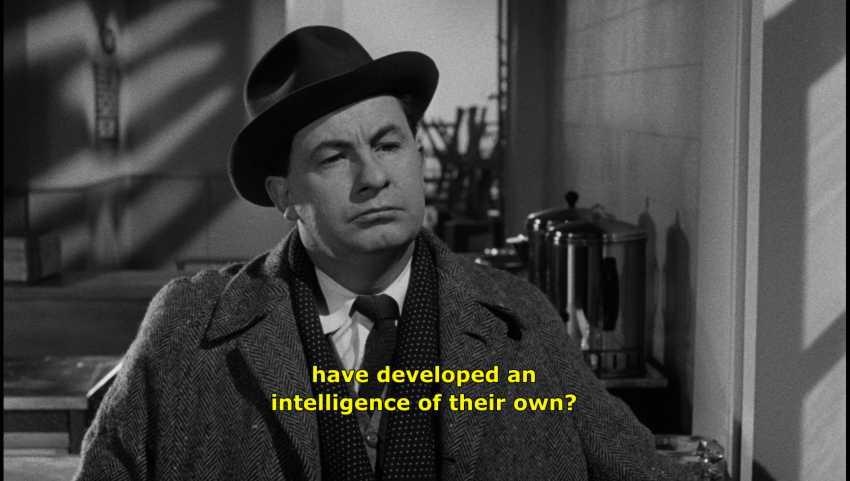