“It is a familiar story, but told with great charm and with sharp observations of how these academia types talk to each other and interact.”

Director Curtis Hanson has come up with a lovable screwball comedy about academia in inclement Pittsburgh, for his follow up to his successful “L.A. Confidential.” It is adapted by screenwriter Steve Kloves from Michael Chabon’s 1995 novel. The film works as far as developing the floundering character of the unstylish middle-aged writing professor, Grady Tripp (Michael Douglas), who after success with his first novel has developed what others on campus think is writer’s block. It has been seven years since he published something new. He cannot finish the manuscript for his next book – which now numbers more than 2,600 single-spaced typewritten pages.

The film also conveys a cozy feeling for campus life for would-be writers and for faculty members who live on campus. But it suffers when its story about an aspiring writer and his faculty adviser gets out of hand. In the end, the film becomes indulgent and ties things up much too neatly.

The film revives the old story about the wily writer who is over-the-hill no longer a ‘wonder boy’ but someone going through the motions of teaching and writing, only to have a young student, James Leer (Tobey Maguire), breathe new life into him. It is a familiar story, but told with great charm and with sharp observations of how these academia types talk to each other and interact.

Professor Tripp is in the midst of a hectic weekend: his wife left him; his mistress, the college chancellor, Sara Gaskell (Frances McDormand), is pregnant by him and can’t decide whether to keep his baby or not; his flamboyant New York editor, Terry Crabtree (Robert Downey Jr.), shows up for the college’s annual Wordfest literary event with a tall transvestite date and wants to see Grady’s new unfinished book, as he is desperate to show his New York bosses a hit novel (the manic editor steals every scene he is in). Tripp’s most talented but unappreciated student, James Leer, who is both suicidal and a compulsive liar, ends up having his manuscript published by Crabtree and also has a gay fling with him. Then there’s that matter of a dead dog in the professor’s car trunk that belongs to the chancellor’s husband, the head of the English department, Walter (Richard Thomas); and, the professor’s nerves are so shot, that he is constantly smoking marijuana. A lot went on during the professor’s weekend, a most memorable one for him, as he went driving around Pittsburgh with James and Crabtree. But, what he was really doing, was searching to find out if he found true love and what was wrong with his writing.

The theme of “Wonder Boys” — is conventional — it is about the author’s self-development. The script is snappy, the actors are pleasing in their roles, the photography, mostly shots of Pittsburgh in the midst of snow or torrential downpours, is bleak — but it interestingly sets the tone for the film’s playful story. The idea for the film was a good one; but, something gets stuck preventing the film from taking a chance and becoming a bold story, one that it could have easily become if it made that choice.

A young, attractive student of Grady Tripp’s, Hannah Green (Katie Holmes), is renting a room in his off-campus house. She is distinguished by her red cowboy boots which she always wears, the obvious crush she has on Tripp, and that she is a stereotype for the attractive girl in class who will try anything to further her career. Here, her attentions are flirted with but she is not fulfilled in a biblical way.

Quentin Morewood (Rip Torn) is the popular writer who is a guest of the college’s for the Wordfest. He is known by his friends as Q and for cranking out books on a regular basis. He is rich and famous, and is the envy of the more talented writers who are not as successful.

Also dragged into the story are an interracial couple who add some slapstick scenes, enlarging the quirky flavor of the film. Oola (Jane Adams) is a sweet waitress in a bar that the college people frequent. Her husband, a James Brown look-alike, who is falsely called Vernon (Knox) by Grady, turns out to be the real owner of the car driven by Grady. It is taken back by Vernon unceremoniously from in front of Tripp’s house. But Grady returns to the car to retrieve the knapsack left there by Leer because it contains the black, fur-collared sweater that Marilyn Monroe wore when she married Joe DiMaggio, which Leer impulsively stole from the bedroom of Walter’s vault (Walter’s a collector of such memorabilia for his upcoming book). That was the night Leer shot Walter’s blind dog as it was attacking Grady. Those scenes were amusing in the same way those old-fashioned comedies of the 1930s and 1940s were, making the most out of a screwy situation.

The film had a warm and fuzzy feeling. It had some good Bob Dylan tunes in the background. It had a tolerant feeling for odd-characters, potheads, thieves, writing students, gays, interracial couples, and adulterers. It was a return to liberalism movie, bucking a trend of a lot of new films to be more conservative or more extreme in their unconventionality. In any case it was good to see a film about some older people with a sense of humor, who had a bit of romance in them and who are able to loosen up a bit. This does not make it a great film but it was diverting and had a certain sophistication that should attract an older audience, one more perceptive about the advantages of a higher education. To the film’s credit it keeps its focus on Tripp as someone who is mixed-up, but who is still trying to be a decent teacher and help those under his tutelage as best as he could. 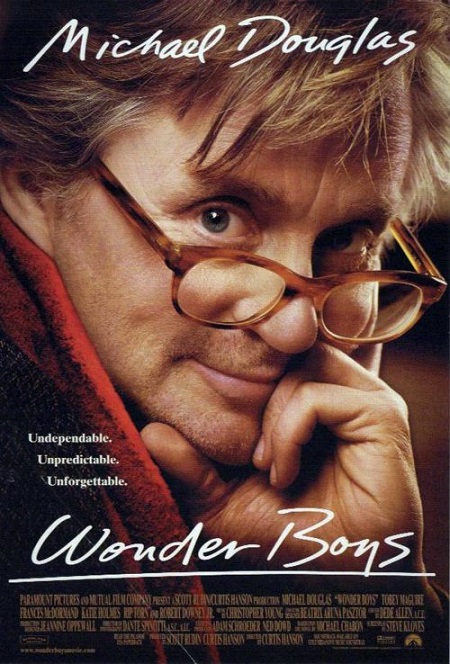