WOMAN OF TOKYO (TOKYO NO ONNA)

A silent Depression-era melodrama superbly directed by Yasujiro Ozu (“Early Spring”/”Good Morning”/”Late Spring”) as a tragedy, who at that point of his career was known for student comedies. It’s based on the non-existent novel“26 Hours” byErnst Schwartz. It’s co-written by Ozu, Tadao Ikeda and Kôgo Noda. The moralistic story is innovatively filmed with breakthrough camera techniques and pays homage to the Hollywood star vehicle screwball comedies by showing the pic’s heroine out on a date at a movie theater and watching If I Had a Million (1932). The snippet viewed focuses on the Ernst Lubitsch shot segment The Clerk, whereby Charles Laughton is the clerk who mysteriously inherited a fortune and is shown leaving his office desk and marching into the boss’s office. It stops short of the clerk telling the boss what to do with the job. For Ozu, this minor film, shot in nine days, signals an end to making comedies and moving full-steam ahead into family dramas.

Ryoichi (Ureo Egawa) is a college student who lives in a modest apartment with his protective industrious office worker older sister Chikako (Yoshiko Okada), who uses the cover story she works late at night as a translator for a professor to fully support in a selfless way her brother and also uses the income to contribute to the local Communist Party. In truth, Chikako works in a seedy cabaret bar as a hostess and is suspected by the police of being an unlicensed prostitute who has not paid her government tax on such earnings. The policeman who investigates, Kinoshita (Shinyo Nara), tells his sister Harue (Kinuyo Tanaka) the police suspicions that came to them through gossipers. Harue is the girlfriend of Ryoichi and tells him this distressing news about his sister. At first Ryoichi disputes it, but the crushed brother treats his sister with hostility when he questions her later that night and doesn’t want to hear that she’s doing it so he can advance himself by getting a good education. Ryoichi leaves the apartment that night and the next morning it’s learned he killed himself. The cynical reporter (Chishû Ryû) who broke the suicide as a crime story, views it without feeling as just another story in Tokyo about the disenfranchised. 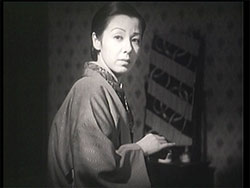