Windtalkers is Hong Kong-born John Woo’s first English-language incursion into “serious” filmmaking. He previously made American lightweight films such as Face/Off and Mission: Impossible 2, which featured violence and action scenes above all else — things he’s shown himself to be quite an expert in doing. Unfortunately Woo doesn’t have what it takes to make a dramatic film. Windtalkers has a message against racism, that message is drowned out by an uninspired preachy and clichéd war film — that if it is to be admired, it is only for the violent and authentic looking war scenes. But even those non-stop action scenes seem more technically correct than emotionally gripping, as this big-budget war film hits you over the head with its sledgehammer attack on wartime racism and does it with the usual cardboard supporting cast of characters. The film is created to appeal to a wide audience who can comfortably munch on their popcorn while WW11 is played out in the Pacific, without having to care how sketchy and contrived everything is. It is unfortunate that the Windtalkers worthy and little known story wasn’t given its full merit and was reduced by Woo to a Hollywood homage to tired conventions, a film that distances the viewer from the Navajo Marines and their important secret mission.

The film tells the story of the importance of the Navajo Code — a code taken from the oral Navajo language that the Japanese can’t break — insuring America’s victory over the Japanese in the Pacific. The 400 or so Navajo codebreakers or windtalkers are trained to transmit radio messages in their native language on the battlefield and are assigned a protector whose mission is to “protect the code” at all costs, but kill them rather than have the enemy capture them (that Marine policy was never confirmed as actually being in place, as this is the film’s fiction). Woo uses this angle to give the film its dramatic motiff and moments of personal tension.

Marine Sgt. Joe Enders (Cage) is a decorated hero, who was wounded on the Soloman Islands–his eardum was perforated and he has also received an ugly purple welt of scar tissue from his ear to his neckline. He had a rough background as a teenager and is haunted that during his first command as a corporal he lost all fifteen men he was in charge of, as he refused to retreat and obeyed the orders he received to defend a swampland. Though he’s still suffering from physical, emotional, and psychological scars, he’s assigned as the war-hardened elite Marine baby-sitter of novice Private Ben Yahzee (Adam Beach), one of the Navajo “codetalkers.” Enders seeks redemption in his new stint, while the always smiling, cheerful, polite, non-violent (can’t even kill the enemy in combat), and happily married Yahzee, with a son he names George Washington, is anointed in Marine sainthood. He puts up with the hostile and brooding Enders, the racist remarks that come early on from some of the Marines, and fights out of patriotism for his country — the one the white men took from the Indians. There is one more similar partnership between the Marine’s humanist harmonica playing Sergeant Ox Anderson (Christian Slater) and his gentle Navajo sacramental flute-playing codebreaker, Private Charles Whitehorse (Roger Willie). They relate by playing duets.

When Enders is released from the naval hospital in Hawaii, after being treated for his wounds and finding a love interest in a kindly nurse (O’Connor), he and Anderson and their codebreakers join the Marine’s 2nd Recon Company who go to battle on the Japanese held island of Saipan in June 1944. Meanwhile the eager-beaver Marine Yahzee tearfully says goodbye to his wife and little boy in Monument Valley, the home turf of many John Ford Westerns (talking about cliché scenes!). The film tells its familiar wartime story of the men bonding, gleefully looking forward to killing the enemy, and infuses it with such forgettable stock characters as the blatant racist (his best taunt is that the Navajos look like the Japs) — Corporal Chick Rogers(Emmerich), the funny accented man in charge (it’s either a Swedish accent or else he’s also a windtalker) — Sergeant Gunny Hjelmstad (Stormare-Swedish-born), the regular guy ethnic Greek (Is there ever a war film without an ethnic character like him?) — Pappas (Ruffalo), and so on down the line. Every Marine was a stick figure seen in countless war films. The part Cage plays was once played by John Wayne, but Wayne played it with more of a natural gait. Wayne had the physical means for the viewer to believe he could defeat the Japanese single-handedly, while Cage has to huff and puff and act awfully hard to convince us that he’s up to that.

The carnage comes in many slo-mo shots, in a camera that is always moving, and in Woo’s inclination to use close-ups on the men getting killed and suffering before they die. Soldiers are dropping like flies, but everyone is so anonymous that it hardly touches the viewer — it all appears as if it were a video game. The best of the four major battle scenes is when the Marines are receiving friendly fire and Yahzee acts heroic along with Enders, as Yahzee dresses in a Jap uniform and uses the enemy radio to relay the message for the Marines to stop firing on them. The story lingers on the relationship between the unsocial and lapsed Catholic Enders and the spiritual Yahzee, also a Catholic but still a follower of his Navajo traditions. But their odd relationship failed to be as enticing as the machine-gun part of the film, as the racism part and why the Navajos were there was never fully developed. The film, whose release was held up after Sept. 11, had no subtlety, as every obvious ploy was used to hammer home points that should have come about in a more gentle telling of this story. It almost seemed like the windtalkers unique story was wasted, as any filler story would do. It was the gunfire, martial arts and the men-in-combat that provided the familiar and prosaic thrills, but that only left this poorly scripted film with a lot of uninvolving visceral shots of the battlefield and a film that hardly distinguished itself from other conventional war films. 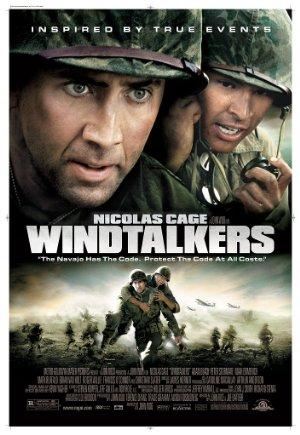 LAST CHANTS FOR A SLOW DANCE

THEY SHALL NOT GROW OLD