WIND ACROSS THE EVERGLADES

“Shows Ray as the rebel with a cause.”

An unusual eco-melodrama promoting ecology and conservation. It’s set in the primitive southern Florida, Everglades, and in the sleepy-town of Miami in the 1890s. It informs us about the Audubon Society and their early fight to stop an eccentric swamp rat gang of profiteering wildlife poachers in the Everglades from massacring wild life. They are led by the chilling Cottonmouth (Burl Ives), who proclaims his motto is ‘eat or be eaten.’ The ruffian swamp boys live close to nature in their bare shacks and wantonly kill white heron and egrets for the feathers, as the big city ladies stylishly wore hats with feathers in them which were popular fashion statements of the day. The more the birds were killed off the rarer and more expensive became their feathers, and the more money the greedy profiteers made.

Nicholas Ray (“They Live By Night”/”In A Lonely Place”/”The Lusty Men”) magnificently directs, catching the adventurous vibes of the period, the hypnotic mood behind the area folklore and the flavor of the outlaw poachers as protesters against civilized society (showing them as closer to nature than the civilized business folks in Miami or even the appointed nature loving Audubon warden). Through cinematographer Joseph Brun’ fine camera work, the ravishing array of location colors makes for an arresting watch. On the Waterfront writer Budd Schulberg was the screenwriter of this lyrical adventure tale, while his brother Stuart was the producer. The siblings had an artistic disagreement with Ray and fired him just before the great cult director’s penultimate pic was completed, and then excluded him from the editing process.

Earnest but boozy Yankee school teacher Walt Murdock (Christopher Plummer) is fired at his arrival at the Miami train station after pulling off the feather from the hat of the wife of a leading local businessman, and is immediately recruited to be the new game warden at the Everglades sanctuary by the Audubon Society. He falls in love with the beautiful Jewish Audubon supporter Naomi Nathanson (Chana Eden), daughter of a local businessman (George Voskovec), and becomes a one-man army going into the dangerous uncharted wilderness of the Everglades to enforce the law of not killing the wild plume birds, only to be mocked by the imperious red bearded Cottonmouth as a foolish idealist. He’s viewed by the civilization-protesting rugged individualist as a progressive city boy who doesn’t have the strength to arrest him. In the climax, the two have a final life and death confrontation, where they canoe together on the Everglades into Miami, with Murdock wearing Naomi’s Jewish star for good luck. The foes try to respect their unmitigated differences, as they realize that the kind of world each would like has no future.

Though it feels somewhat choppy from a poor editing job, it’s an unusually powerful pic that shows Ray as the rebel with a cause–someone who always manages to make provocative and intelligent films even when dealing with tough circumstances. 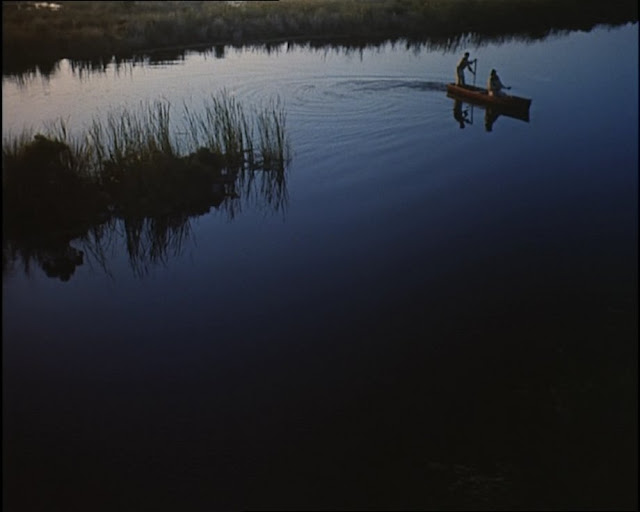