Israeli fiction writers, the married couple of Shira Geffen (“Wristcutters: A Love Story”) and Etgar Keret, in their directing debut as a team, co-direct this poignant indie, a whimsical serious comedy that explores modern-day loneliness and alienation in Tel Aviv. Three troubled young women who have temporarily lost their way somehow find that their lives intersect in the city when they bump into each other without formally meeting.

The title jellyfish is used as a metaphor for those whose destinies are out of their hands and thereby instinctively sting others when they feel threatened, as they are under the influence of a world populated by phonies, the indifferent, the untrustworthy and liars. Since jellyfish are diaphanous drifters, the three main characters and the little lost girl become the magical jellyfish drifters.

The three women are: a distressed clumsy waitress for a cheap caterer of weddings named Batya (Sarah Adler), barely surviving on her meager wages and living alone in a dumpy apartment with a leaky ceiling after her boyfriend Amir leaves her, who finds a lost mute redheaded little girl (Nikol Leidman) on the beach as she emerges from the water attired only in a candy-striped inner tube and a bikini bottom and can’t resist keeping her for the weekend after attempting to turn her over to the indifferent police; a Filipina caregiver, who speaks English but not Hebrew, named Joy (Ma-nenita De Latorre), who is eager to return home to her young son and is ironically sent by a domestic employment agency to mind the crabby elderly German mother of her too busy avant-garde actress daughter; and the frustrated newlywed Keren (Noa Knoller), whose Caribbean vacation is cancelled when she breaks her leg during the wedding reception while trying to climb out of a bathroom stall she accidentally locked herself in and she makes life hell for her appeasing groom, Michael (Gera Sandler), as the dumpy Tel Aviv hotel they stay in has a broken elevator and none of the rooms please her.

It’s an engaging melancholic deadpan comical movie that digs into the nation’s anxiety-ridden unconscious (with the sea used as a metaphor in a Jungian way) through these lead characters and touches on a number of things that show there’s great gulfs between people and between reality and the perception of reality. But it also shows that life could be magical, and that even the titled naked 5-year-old (who we are given enough hints that she may after all only be imaginary) can survive on her own in such a cold world if she keeps her innocence (with the lost ‘jellyfish’ child a metaphor for the country).

The fault is that these stories seemed contrived to fit an agenda and though each story is interesting, none are fulfilling or completed without raising further questions about what it all means. It seems more like an arty pretense than a real attempt to get to the bottom of all the emotionally challenging issues it raises.

It was the winner of the Camera d’Or at the 2007 Cannes Film Festival. 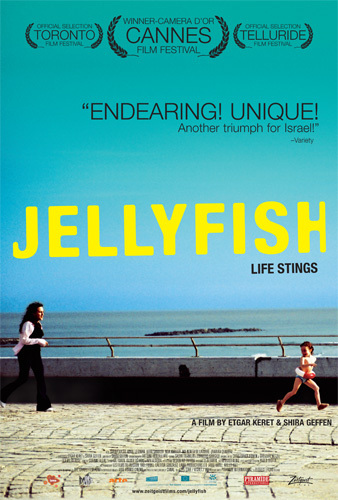