Stanley Kramer’s liberal claptrap message pic, directed by Laslo Benedek, is about rebellion and misunderstood 1950s youth. It was wild enough that it was banned in Great Britain until 1968, but when viewed today one wonders what’s all the fuss about. It was largely faulted for its lack of a moral solution, but as a melodrama it’s risible and outdated. It’s based on the Harper’s Magazine story The Cyclists’ Raid by Frank Rooney and penned by John Paxton. The story is loosely grounded on a real event in 1947 when 4000 bikers took over the small-town of Hollister in California on the Fourth of July weekend. In “The Wild One” the location is changed to Wrightsville, a nondescript Middle American California town invaded by only forty or so Black Rebels Motorcycle Club (BRMC) members plus about ten or so from a rival gang. Everything seems artificial, highly exaggerated and staged. The movie despite being not good, reached landmark status as a youth rebellion classic because it played as a shocker against all the other Hollywood more staid rebellion flicks and tapped into a youth audience. It was the first sign of the social unrest that was to come in the 1960s, which some blame for a permissive society while others say it was caused by an uptight square society.

The film begins with a narration by Marlon Brando, who plays motorcycle gang leader Johnny Strabler taking his BRMC black leather uniformed gang for some fun and mischief to the weekend motorcycle competition in the town of Carbonville. The gang doesn’t enter the race but gets kicked out of town for stirring up trouble. Before they depart, one of the bikers steals the second-place prize trophy (only because the “two feet high” first place prize trophy was too big to hide under his jacket), and gives it to the swaggering Johnny. The gang aimlessly rides to the nearby sleepy small-town of Wrightsville, and immediately begin raising hell. Sheriff Harry Bleeker (Robert Keith) is made to look like a fool as he’s unable to deal with the disturbance and is viewed as the town’s joke. The violence escalates when Chino (Lee Marvin) arrives with his ragtag biker gang and provokes a fight with Johnny. Chino’s group broke away from Johnny’s gang and the leaders remain enemies but hate cops more, so they will not cooperate with the law to get the other arrested. During the scuffle a hotheaded local Charlie Thomas (Hugh Sanders) tries to drive by, but the bikers mob him. It leads to a drunken Chino thrown in jail, at last, by the sheriff, but when Charlie is not arrested along with him the biker gang storms his house and drags him off to jail. Meanwhile Johnny is making nice talk with Sheriff Bleeker’s respectable waitress daughter Kathie (Mary Murphy), and the two misunderstood youths almost seem to be communicating. When away from the gang and acting less macho, Johnny is slightly less obnoxious and seemingly a more sympathetic character as it’s implied he’s so angry because he had a troubled youth.

When Kathie is being harassed by his biker gang, Johnny comes along and escorts her to a safe spot. The townsfolk by this time have become a vigilante mob led by a revengeful Charlie, who they just freed from jail, and when they believe the biker intends to rape the girl he is attacked. The sheriff comes along to break up the mob, but they continue to chase Johnny down and knock him off his motorcycle with a thrown tire iron. Johnny’s bike goes wild and kills a pedestrian, the elderly dishwasher/bartender Jimmy. By this time Sheriff Stew Singer (Jay C. Flippen) from a nearby bigger town arrives with reinforcements and stops the riot and arrests Johnny for manslaughter. Kathie defends Johnny and after a stern lecture from the sheriff, the angry youth symbolically leaves behind his stolen trophy. Johnny then looks cautiously at Kathie while at the coffee shop, but is unable to say “thank you” and rides out of town alone.

The two most noteworthy things the film is still remembered for are Brando asked by a town girl “What are you rebelling against?” and responding “What’ve you got?” and the poster of Brando poised on his Triumph with his captain’s hat slightly tilted and looking cocky as he smiles. 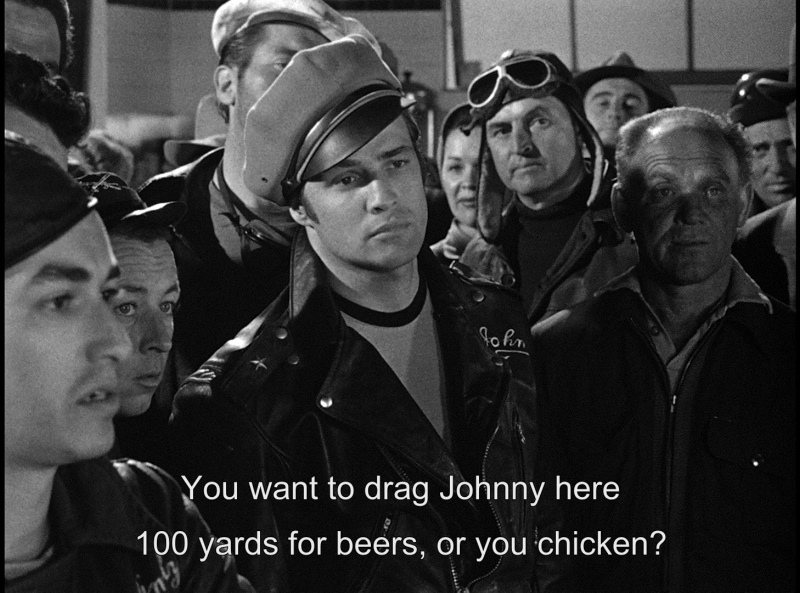