An homage to the 1950s film noir as Timothy Carey, Marie Windsor, and Elisha Cook, all who appeared in Kubrick’s The Killing (1956), appear together once again in bit parts. Jane Greer also has a brief part as the widow of a retired bank robber and seems to be the only one in the film who appears to be rational. The Outfit is a superb adaptation from one of the sequels to Richard Stark’s novel The Hunter, which was made into movies such as Point Blank, The Split, and Godard’s Made in USA. John Flynn provides a tight script and directs in a high-flying style, keeping the film fast-paced and never leaving time for a dull moment or a bit of introspection or reason to wonder that it’s all leading to a predictable outcome. It’s a violent film that knows where it wants to go and dazzles in the efficiency on how excitingly it gets there. It’s sharply photographed by Bruce Surtees, catching the treacherous world inhabited by the anti-social underworld characters. Robert Ryan turns in a marvelous performance as the sinister mob leader, while Robert Duvall’s laconic performance superbly captures the determination of his character’s will to survive in the unlikely manner he deems necessary.

Robert Duvall stars as Earl Macklin, a recently released from prison career small-time criminal who learns his retired criminal brother Ed has just been assassinated on his rural farm by the syndicate. Earl is met upon his prison release by his girl friend Bett (Karen Black), who admits that she told the mob Ed’s whereabouts when threatened by Jake Menner (Timothy Carey) that her face would be cut up. When Earl shakes down low-level thug Frank Orlandi, sent by Menner to assassinate Earl, he learns they have been targeted by the syndicate, referred to as “The Outfit” and run by the sinister crime boss Mailer (Robert Ryan), for robbing their bank in Wichita. Instead of waiting for The Outfit to come after him, Earl teams up again with his ex-partner Cody (Joe Don Baker), now the owner of a diner in rural Oregon. The two contact gundealer Amos and buy magnums and an arsenal fit for fighting a gang war. The plan is to to exact revenge on the syndicate underlings such as Menner and Sinclair, by holding them up in their varied businesses from gambling rooms to bookie joints and thereby forcing the syndicate to settle for this inconvenience by paying them $250,000 to stop. After Mailer agrees to the demands, he sets up Cody and Earl for a double-cross. But the boys outgun Mailer’s thugs and escape the trap, bringing down a few of Mailer’s hired hands–which shows the crime boss that he’s in for a real fight.

The third act turns into a duel for life or death between the automated syndicate and the freewheeling indie team of Earl and Cody. It comes down to the boys penetrating Mailer’s tightly guarded estate and nailing the Big Boss, despite all the odds being in his favor. Its lesson is that the small guy can take on the corporate Big Boys if he knows how to muscle him around and is willing to take risks. Killing the boss doesn’t stop the syndicate, but for the moment gives the boys a sense of relief that they can take on the Big Boys and make a dent in their organization, and also feel for a while the same power they do. In this film survival is equated to power, money and revenge, which means more than leading a good life or being with the woman you love. This grim outlook on life gives the film its neo-noir feel. 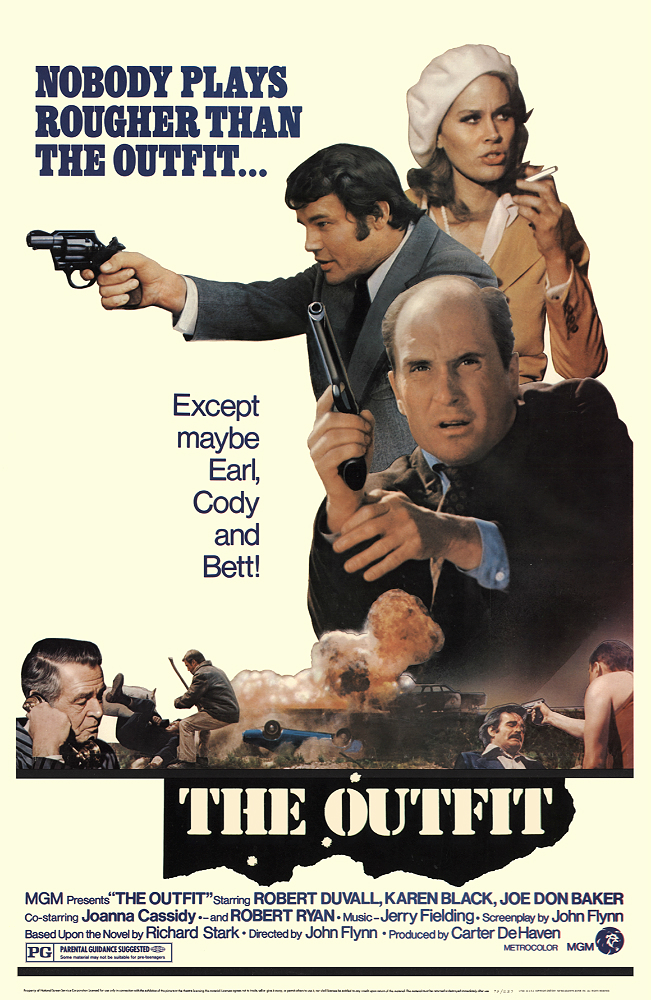