WILD BOYS OF THE ROAD

“Loved the energy of this heartfelt Depression-era road film.“

Loved the energy of this heartfelt Depression-era road film. Though dated, this William Wellman (“Roxie Hart”/”Night Nurse”/”Wings”)directed film acts as a vivid time capsule capturing the fever pitch of the time that had thousands of homeless children bumming rides on freight trains, joining a growing army of young hobos,and living in hobo camps.It’s a film that mixes realism with social drama, never avoiding the harsh realities of life for its moviegoers but leaving them with an optimistic message that President Franklin D. Roosevelt’s New Deal will bring relief. The film did a poor box office, as many critics thought the rosy ending was not believable and the hard-pressed public preferred escapism for their entertainment. It’s based on a story by Daniel Ahern, and is written by Earl Baldwin.

Two middle-class high school students from a small-town in the Midwest, Eddie Smith (Frankie Darro) and Tommy Gordon (Edwin Phillips), decide to drop-out of school and hit the road to get work because their parents are unemployed. Eddie’s dad (Grant Mitchell) got laid-off on his job at the cement factory, while Tommy’s widowed mom can’t find work. The boys ride east on a freight train where they hook up with a gritty female waif named Sally (Dorothy Coonan), who is dressed as a boy in self-defense. She’s going to see her aunt (Minna Gombell) in Chicago, as she comes from a large family and wishes to give mom one less mouth to feed. In Chicago, her aunt is arrested for running a bordello and the trio flee the city to ride the trains again.

Chased off the trains by railroad dicks, the young army of hobos band together to fight them off. In one incident, Sally is raped by a vile train worker. After chased off the train in Ohio, Tommy loses his leg as an oncoming train runs over him. The trio stick together and form a “sewer pipe city” near Cleveland, but are eventually chased from there by the city police. They end up living in a NYC dump yard. But things even get worse when Eddie is arrested, as two con men ask him to deliver a note to a movie theater cashier and they’ll give him $5. The note contains a demand for money, and the cashier screams for the police. The trio are arrested and appear before a sympathetic judge (Robert Barrat), but refuse to give them their parents’ addresses. Nevertheless the judge has the court find them temporary jobs and dismisses the charges against them. He only asks them to promise the court to soon rejoin their families.

Coonan was working as a dancer in the Busby Berkeley musical Gold Diggers of 1933, when spotted on the studio back-lot and hired by Wellman. During the shoot he became smitten with Dorothy and soon after she became Wellman’s fourth and final wife. 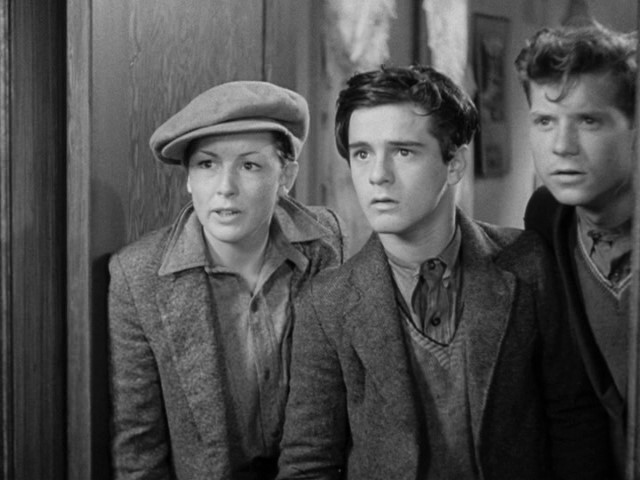