IMPORTANCE OF BEING EARNEST, THE

“The film lacked the capriciousness it required…”

When the popular play opened in 1895, it was interrupted with closure by the arrest and conviction of its author Oscar Wilde on a charge of immorality (homosexuality). “Earnest” is built upon a delightful play of words, misunderstanding and confusion that intertwine; and, it incredibly delivers a reasonable and well-constructed conclusion in a rather stately fashion (unfortunately, this version can’t duplicate that kind of elegance). But it’s the great dialogue that should survive any version, as no version can completely ruin this magnificent play on words; and, whatever actor-turned director Oliver Parker’s (“An Ideal Husband“-also from a Wilde play) re-interpretation does or does not accomplish, it at least has all the epigrams for this ‘comedy of manners’ intact. This includes my favorite bon mot “Ignorance is like a delicate exotic fruit; touch it and the bloom is gone.” Some of the other noteworthy Wilde digs are: “The very essence of romance is uncertainty”, “It is better to talk nonsense than to listen to it”, “To lose one parent…may be regarded as a misfortune; to lose both looks like carelessness”, “Thirty-five is an attractive age. London is full of women of the highest birth who have, of their own free choice, remained thirty-five for years”; and, “All women become like their mothers. That is their tragedy. No man does. That’s his.”

The witty nonsensical satire acts to expose the hypocrisy of the morals of Victorian society, as it regales superficiality while at the same time it makes its aristocrats who expound that look terribly foolish. In its day it really put it to the upper-class members who also were its regular theater goers. What Parker does differently from the other versions, is take his “Earnest” outside in the English country air and he gives it more haughty airs. He has the actors ham it up, as he now replaces the stagy indoor scenes with location shots of splendid mansions. He thereby attempts to breathe fresh life into this long-running play that is not easy to transfer to film, especially since it is so verbal and created only for the stage. But in doing that he also changes the play’s tight rhythms while he cuts, adds, and switches things around, as his film version is looser and more free flowing. Nevertheless, it is still faithful to the original play. But by changing the rhythms the badinage often appears without punch, as if the actors were going through the motions without the spontaneity of the lines that Wilde intended. All the added scenery was also more of a distraction than a help. If I may presumptuously speak for Wilde, I don’t think he would appreciate these changes. It’s a risk Parker took for the sake of making the film more cinema friendly. Whether he succeeded or not is a matter of one’s taste, which is the reason for the film’s mixed reviews. Though I think those who come to this Wilde work for the first time will be more pleased with it than others who already have a preconceived notion of how it works best. The other judgment of the film comes by way of the performers, as a stellar cast was gathered. But how well the ensemble cast performed is arguable, as comparisons with previous versions is inevitable though not totally justified.

The plotline centers around Jack Worthing (Colin Firth), who creates the fiction that he’s named Ernest. He is a 35-year-old English dandy of substantial means through investments and is also a gentleman landowner with a large sprawling country estate, while he has the responsibility of being a ward to his niece, the teenager Cecily Cardew (Reese Witherspoon), who is the granddaughter of the one who rescued him from being an orphan, the millionaire Thomas Cardew. Her grandfather raised him after he was abandoned in a handbag in Victoria Station, on the Brighton line, as he was handed the wrong package when he went to retrieve his. Upon his death, he generously left Jack his current fortune and the responsibility of being a ward to Cecily until she turns 35.

Londonite Algernon Moncrieff (Rupert Everett) is also a bachelor dandy gentleman and his parents are deceased, as he is cared for by his haughty aunt, Lady Bracknell (Judi Dench). He is debt-ridden and often has to make excuses for leaving town, inventing the name Bunbury as someone he’s visiting, because his creditors are after him; and, all because he’s irresponsible. His behavior can be described as loose, snobbish and sardonic, as he cuts a dashing figure hobnobbing around town in the ritzy London spots. He is seen in the film’s opening scene toying with the older Jack in a nightclub, where they accidently ran into each other. They are discussing Jack’s usage of his invented name Ernest. Jack uses that fictitious name to escape from his country estate in order to see many women, as he tells his ward that he’s off to visit his younger brother Ernest in the city; and, in London, he uses that name to court Algernon’s attractive cousin Gwendolen (Joan Greenwood). When Algy flashes the cigarette case that Jack lost with the inscription ‘Fondest love to Uncle Jack, from Cecily,’ Algy is intrigued to know who she is and devises a plan to meet her. But even with all Algy’s badgering of who Cecily is, he fails to get Jack’s country address.

In what is supposed to be the film’s most pivotal scene, the play’s ultimate snob and carrier of nonsensical badinage to the extreme, Lady Augusta Bracknell, struts in to her townhouse luncheon date with her cousin Algy and her not too bashful, ditzy daughter Gwendolen also arrives. Lady Bracknell is expecting her favorite cucumber sandwiches, but instead Algy ate them all so the servant, Lane, has to inform her that cucumbers weren’t available in the market today for any price. Her further bad news is that she sees the bachelor she never considered for her daughter, Ernest, in the room. When Ernest and Gwendolen are left alone as arranged in advance by Algy — as they trade favors, with Algy getting Jack to meet him for dinner at the swank Hotel Savoy — Jack as Ernest proposes and she accepts because she had already written in her diary that she can only love someone with the name of Ernest. But this proposal is squashed by Lady Bracknell when she hears of his origins in a handbag.

When Gwendolen unexpectedly arrives at a tavern where Jack and Algy are, she tells him that she still loves him for being named Ernest and requests his country address. Algy overhears this and secretly visits Jack’s country-estate posing as Jack’s brother Ernest. He instantly falls in love with the beautiful but empty 18-year-old Cecily. She mentions that Jack talked about his wicked brother, but this talk of how bad he is doesn’t daunt her. She grandly states, when Algy tries to say he isn’t so bad, that it’s hypocritical to pretend to be wicked but instead to be leading a good life. When he proposes, she tells him that she wrote in her diary three months ago that they were engaged, even though they never met. This calls for a real proposal, which she accepts.

Jack surprisingly returns early from the city, dressed in mourning clothes. He tells the meek Dr. Chasuble (Tom Wilkinson) — who has just got up his nerve to have been openly fawning over the dotty tutor, Cecilia’s governess, Miss Letitia Prism (Anna Massey) — that his brother Ernest died unexpectedly in Paris from a draft. But Cecilia comes out of the rose garden and gladly informs her guardian that his brother Ernest is alive and that they are engaged. You see, Cecily is also irrationally fixated on the name Ernest as one of sincerity. She sees her job as to now make sure the brothers reconcile their differences. There will be two other visitors who unexpectedly arrive, Gwendolen and Lady Bracknell, as the lover boys see the minister, Chasuble, and arrange to be baptised with the Christian name Ernest.

The story winds down as Miss Prim, under a grilling from Lady Bracknell, turns out to be the one when working as a governess for Lady Bracknell’s sister, Algy’s mother, who absent-mindedly placed her manuscript in the baby carriage and the baby she was minding in her handbag–which she deposited in Victoria Station. This baby is, of course, Jack; or, rather, it is Ernest.

The film lacked the capriciousness it required, as it got some laughs but never felt as if this version broke any new ground. Not that it was bad, it just wasn’t more than competent. The actors who seemed to come out of this the best, were the minor characters like Tom Wilkinson and Anna Massey. They seemed to have the right whimsical spirit for this farce, giving splendidly fine understated performances. While the principle characters, Colin Firth and Rupert Everett, never really distinguished themselves though they certainly didn’t disappoint. The main disappointment honors go to the illustrious Judi Dench, she suffers in comparison to Dame Edith Evans who played the part in Asquith’s properly dry and straightforward 1952 version. As her role was the most significant one in the film, where a great deal of the satire and comedy was coming from, therefore her failure to sparkle or bring the required levity or acerbic spirit to the part it needed was a serious transgression. She appeared more stern and stiff than outrageously funny. She seemed to be just lending her authority to the role more than tickling the funny bone. As for the other cast members, Frances O’Connor makes for a somewhat appealing screwball comical airhead Gwendolen. The American actress Reese Witherspoon, changing her type of modern young lady role she’s accustomed to playing, maintains a proper British accent as Cecily and seems at ease with this character change as she has no trouble stepping up in class and conveying a flighty aristocratic charm. I should add that despite its many faults it was a fine overall production that had its enjoyable moments and was sensibly accomplished, but certainly doesn’t merit lighting up a victory cigar to celebrate any great triumph — it was “earnest” only because it’s Oscar Wilde. Really, that’s all you need! 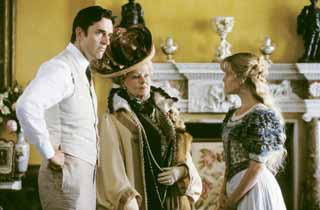