“As the title indicates, it’s a film about yearning for someone dearly missed.”

A fair debut as a director for screenwriter David Leland. The bittersweet coming-of-age melodrama is set in an uptight British provincial seaside resort town during the early 1950s. As the title indicates, it’s a film about yearning for someone dearly missed. Leland based the central character, a troubled 16-year-old girl named Lynda (Emily Lloyd), on Cynthia Payne, who was the young madam presented in Personal Services–a film he wrote the screenplay for. Lloyd gives a robust performance as the foul-mouthed rebellious girl, who can’t handle that her mother died when she was only eleven and has since been raised in an antagonistic relationship with her barber widowed father. The man is just not emotionally equipped to deal with his troublesome-bugger of a daughter, who shows off as a free spirit and is unable to hold down a job–even an easy one that a relative gives her. There seems to be no problems with Lynda’s younger sister.

The spunky girl leads men on with her salty talk (her favorite retort is “Up your bum”) and showing off her legs as if she were Betty Grable. With sex on her brain while hungering for true love (influenced by going to the cinema to watch teary romantic postwar melodramas), she stumbles into a foolish sexual initiation that’s never completed with a play acting young bus conductor (appears in bed with a cigarette holder and silky yellow pajamas, imitating Ronald Colman) and soon after starts sleeping with the local theater’s middle-aged sinister and creepy projectionist (Tom Bell)–another outcast, who also happens to be one of dad’s masonic mates. Lynda soon finds herself pregnant, and instead of shamed by the pregnancy flaunts it in the faces of the locals.

The film never worked for me because I thought of Lynda as more of an annoying brat than a free spirit, and the Brit working-class was never as skewered as it was set up for this girl’s shocking profanity and rudeness and made into a too much of a convenient foil. The funniest scenes are reserved for when Lynda’s treated by a shrink (Heathcote Williams), who her father contacted to cure her swearing (she can’t come up with a curse word for F, but has no trouble with the rest of the alphabet). 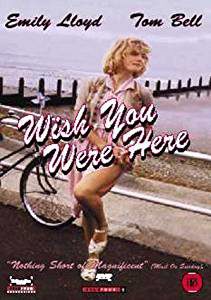