“The heavy going abstract film probably will appeal only to hard-core cinephiles.”

Eccentric arty Russian filmmaker Aleksandr Sokurov (“Russian Ark”/”Moscow Elegy”/”Mother and Son”) goes full-blast into the abstract in his haunting hypnotic journey into the major literary themes of 19th century Russia. Some might recognize Dostoevsky in its major theme, but also along for the ride are other notable 19th century Russian writers such as Gogol and Gorky, Pushkin and Tolstoy. Its intellectual content is mindful of how Sokurov supporter Andrei Tarkovsky used such weighty material for his non-commercial films. The heavy going abstract film probably will appeal only to hard-core cinephiles. Also, it can perhaps be valued just as much for its experimental technical accomplishments than for any entertainment value. This is a tough watch. One is expected to be well-versed in 19th century Russian literature and be able to see the plotless story as if it were a personal dream.

The main character is the unnamed protagonist (AleksandrCherednik), who is like the anti-hero of Dostoevsky’s “Crime and Punishment.” When he discovers a horrible bloody murder (off camera) he walks along a river bank among its many mysterious catacombs and uses the murder to question everything about his life, his guilt feelings, his search to find out if God exists and why he lives in such filth. The wanderer is encouraged to be such a thinker by the questionable young woman (Elizaveta Korolyova) he meets along the way. He also comes across beggars, the impoverished, loonies, hostiles and suicides jumping off a bridge.

Excerpts from Mahler’s song cycle “Kindertotenlieder” supports the bleakness and adds to the grey-like atmosphere. Its shot in black-and-white giving off the aged look of 19th-century photographs.

The dialogue is minimal. The narrative, relating to the above mentioned Russian literary themes, is structured like Dante’s journey into hell. It’s a film that tells its story best through stunning visuals that encourages the viewer to meditate on it. 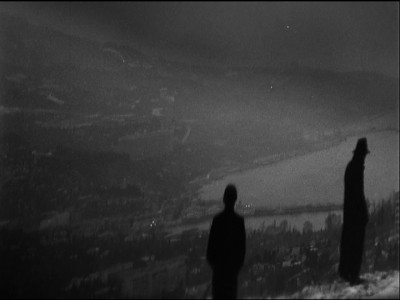