TIP ON A DEAD JOCKEY

A downbeat and unconvincing psychological action/melodrama that ends with an unmerited happy ending and some questionable heroics, but remains watchable as a pedestrian star vehicle. It’s well-crafted but veteran studio director Richard Thorpe (“Night Must Fall”/”Above Suspicion”/”Malaya”) only gets listless performances from the cast.WriterCharles Lederer bases it on the postwar stress-syndrome New Yorker magazine short story by Irwin Shaw. MGM’s longtime contract player, Robert Taylor, “the Man with the Perfect Profile,“ is his usual stiff self as the handsome likable hero.

Lloyd Tredman (Robert Taylor) is a WWII American airman and during peace-time an airline pilot until recalled for the Korean War, where he’s discharged at its end as a decorated hero. But Lloyd has lost his nerve to fly and is shaken by all the war casualities he witnessed, so he decides to be an expatriate idler party-boy in Madrid and after living there for a month asks his pretty sweet wife Phyllis (Dorothy Malone) for a divorce but gives her no reason why. When a Reno lawyer tells the stunned Phyllis she can’t get a divorce without stating the grounds as to why, she flies to Madrid to ask her hubby for an explanation. They married just eight-weeks before his military recall, and seemed happy. Lloyd tells her war changes things and now he can’t handle any emotional entanglements.

Living with Lloyd as a houseguest is the chatty Madrid native Toto (Marcel Dalio), around for comic relief. Also a neighbor is Jimmy Heldon (Jack Lord), who flew under Lloyd’s command in Korea and married a Spanish nurse named Paquita (Gia Scala)–the reason the best friends came to Madrid. The boys are broke and need a large sum of money to jump-start Jimmy in an import car business. Oily smuggler Bert Smith (Martin Gabel) appears out of the blue to offer Lloyd $25,000 to fly to Egypt and bring back a box with English currency. Lloyd bets all the money he has on a horse he has a stake in with a rich lady to win a steeplechase, and tells Smith if the horse wins he won’t take the job. During the race the rival jockey causes Lloyd’s horse to take a spill and the jockey (Jimmy Murphy) to die.

The smuggling deal gets dicey when Lloyd is chased by Interpol when spotted as a smuggler and he reforms while in mid-flight by tipping off the Spanish authorities that he’s smuggling heroin. Afterwards the lads are still broke but Lloyd is not imprisoned, his marriage is saved and he has regained his nerve to fly.

I’ll give you a tip that’s a lock, don’t bet on this film to be in the money! 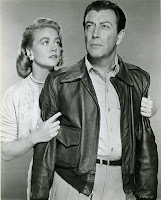