Parole, Inc is told in flashback from a hospital, where federal agent Richard Hendricks (Michael O’Shea) is recovering from being shot in the leg and being severely beaten. Hendricks tells how the governor, police commissioner and state’s attorney general held a secret meeting to put an end to corruption within the state parole board, whereby they are letting out on parole violent criminals (more than half of the crimes are done by repeaters). It’s Hendricks job to report only to them and infiltrate the gang involved, and he takes on the identity of a bank robber who fled the country after his bogus parole. By frequenting a gangster hangout club owned by Jojo Dumont (Evelyn Ankers), Hendricks makes contact with those who bribe the parole board. He soon uncovers that the big boss is a lawyer named Barney Rodescu (Turhan Bey), who is also Jojo’s boyfriend. After working his way into the gang’s confidence, he aims to trap them and the corrupt parole board members in a farm owned by the lawyer. But things go wrong, and Hendricks is beaten by the gang before the police arrive and nab all the baddies in what goes for a shootout.

The story for this low-budget B-film from Eagle Lion studios is just about as far-fetched and ludicrous as the acting. It also lacked suspense, any surprises and the production values were shoddy. The only good thing is that it moves along at a fast clip and is over in a flash. 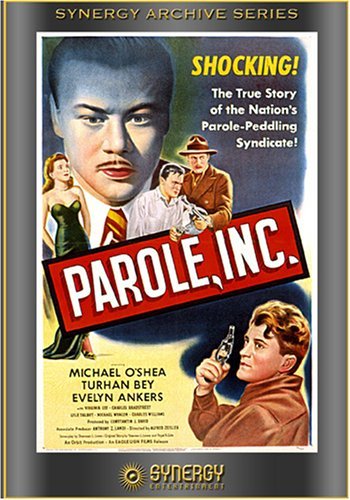