This bedroom farce is directed by the Britisher Clive Donner (“The Caretaker “/”Oliver Twist”/”Luv”) and is based on a script by the stand-up comedian Woody Allen, who also has a supporting role. Allen saw it as a satire on womanizing. The farce is supposedly based on the love life of Warren Beatty. It became a box office smash despite its many shortcomings and crudeness. Tom Jones sung the title song, which became a hit. The all-star international cast goes overboard in keeping things zany but not necessarily funny.

Womanizing Paris fashion magazine editor Michael James (Peter O’Toole) seeks the help of loony Viennese psychiatrist Dr. Fritz Fassbender (Peter Sellers), adorned with a Beatles wig and speaking in an absurd accent, when he can’t commit to a relationship with his wonderful fiancée Carole Werner and can’t keep his hands off the women he meets through work. Fassbender is dominated by his overbearing wife Anna (Edra Gale), who rails against him for his adultery. The shrink admires his new patient for all his conquests, and is seeking a relationship with one of his comely patients Renée (Capucine, former model and protégé of producer Feldman) who shoves him aside because she’s taken with Michael. But Michael shoves her back to the shrink in an effort to reform. Michael’s best friend is Victor (Woody Allen), a dresser at the Crazy Horse striptease club. The nebbish Victor is also in love with Carole, but is unable to get any women interested in him because he’s a nerd. Carole uses him to fake a romance in order to get Michael jealous. Carole informs Michael that her parents are arriving for a short visit and he’ll have to either wed her or leave. This makes Michael want one more last fling before settling down. While taking in a show at Victor’s club, Michael’s taken by the beautiful stripper Liz (Paula Prentiss). She’s a suicidal political poet, who leads him on but seems more interested in reading her doggerel to him than going to bed. Michael shortly begins a third romance with a mad parachutist named Rita (Ursula Andress).

The farce kicks into high gear after the parents visit and the couple agrees to marry. Michael and Carole check into the fancy country Chateau Chantelle hotel, known as a place guys take their mistresses, to celebrate their decision and coincidentally so does Fassbender with Renée. Neither couple knows the other is there. It results in a climactic chase in and out of the bedrooms, with many mishaps and every nubile gal Michael was after showing up, before Michael and Carole tie the knot.

The 1960’s wacko slapstick humor has not dated well, and what might have been a scream back then is a yawn now. Allen’s first major screen role and first feature film script were both severely altered by a jealous Sellers, who improvised and appreciably changed the script around giving himself a bigger part than Allen’s. This made Allen wish to never give up control for a script he worked on, and he from now on would direct his own scripts. 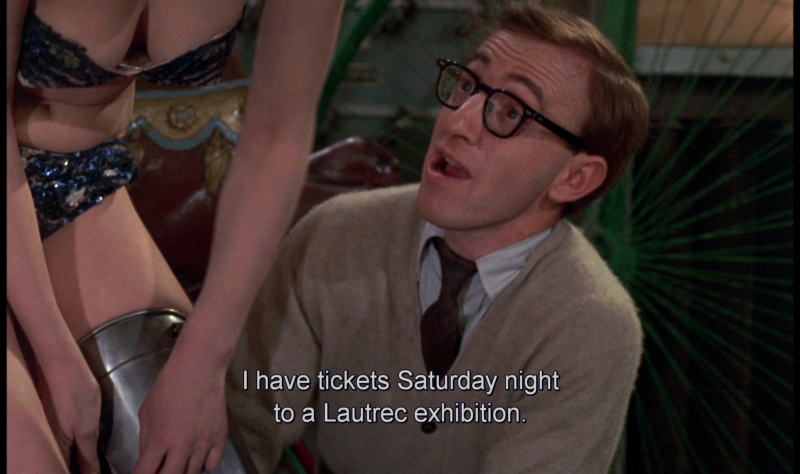