“A film that encourages one to put on their thinking cap.”

Hungarian filmmaker Béla Tarr’s (“Damnation”/”Satantango”) weird but astonishingly wonderful fable invites being an allegory even if the director insists it’s not. It can be viewed as a dark cosmic horror story that is meant to be unsettling and not easily interpreted as it tells of the harmonic order of things disturbed and chaos becoming the rule of day. The puzzling tale makes silence golden and its ghastly nightmare scenario something beautiful to behold because it’s so astonishing. That’s not to say this bleak and very serious arthouse drama isn’t also comical in a Chekhovian way, as it looks realistically at the human condition through the so-called impressionable innocent eyes of a self-absorbed holy fool, Janos Valushka (Lars Rudolf), the ambiguous protagonist who works as a postman and caregiver and takes us around his despairing desolate village experiencing a crime wave and coal shortages to explore such things as the roots of violence and if there’s really such an animal created by God as this gigantic whale that arrived with the circus and such a place as a stable society. The two leading parts are magnificently played by German actors, the gaunt Lars Rudolf and the always alluring Hanna Schygulla, whose voices were dubbed in Hungarian. Schygulla is the noted Fassbinder actress; it was good seeing her again even if she now looks too much like Hillary Clinton (coincidentally, a necessity for her role) instead of the sexy way she looked as a young actress.

“Werckmeister Harmonies” is based on the 1989 (the year when state socialism in Hungary ended) novel ”The Melancholy of Resistance” by László Krasznahorkai (he also wrote the novel for Satantango). Béla Tarr in collaboration with his editor wife Agnes Hranitzky are faithful to the spirit of the book though the film is much different in structure; it adds a shocking eight-minute long take shot without dialogue–which wasn’t in the book–of a deadly assault by the zombie-like worker masses on a run-down men’s hospital that has them beating up helpless patients (in a biblical sense the Earth’s meek) and wrecking the facility (an Old Testament type of destruction).

The slow-moving black-and-white film creates a brooding visual mood in its incongruous chiaroscuro look that magnifies the apocalyptic unrest that is unleashed as the town goes bonkers when a circus arrives. Also, everyone seems to communicate through telepathy rather than speech. This adds further to the film’s uniquely chilling and mesmerizing feel.

The story is set in a frostbitten depressing fogbound unnamed Eastern European provincial town whose citizens are alarmed that a traveling circus comes there that features the largest whale in the world, a dead creature put on display in a corrugated metal trailer where customers buy tickets as if seeing a freak show. There’s also a faceless demonic demagogue dubbed the Prince, whom we are told has the gift to make money for the circus and the mysterious powers to arouse the citizens to riot and destroy their town. The shadowy Prince exploits the citizen’s superstitious beliefs and fears of the unknown through his violent speeches and evil telepathic powers.

The film opens just before closing time at a local pub, where the twentysomething Janos uses some of the drunk patrons as models of the sun, earth and moon to demonstrate a cosmological model of a lunar eclipse. He explains the purpose of the demonstration is “to accept the weight of darkness.” Janos nervously tells the men “All I ask is that you step with me into the bottomless where constancy, quiet, peace and infinite emptiness reign.” This very well might be what Tarr is trying to say, come and see the dark side of the world–it’s here anyway whether you care to look or not.

Janos leaves the bar when given the boot by the bartender and returns to his caregiver duties in the capacious house of the reclusive composer, his aristocratic Uncle Gyorgy Eszter (Peter Fitz), a weary intellectual who has rejected the world after rejecting the 17th-century German organist and musical theorist Andreas Werckmeister for coining the term well temperament and describing a system of well temperament now known as Werckmeister temperament. Gyorgy views his mission in life is to correct this wrong theory even if he must become blind and deaf to the realities of the inflamed world around him. The composer’s estranged reactionary wife, Trunde (Hanna Schygulla), threatens to move in with him unless Gyorgy gets the leading citizens to sign a petition from the “clean town” movement she’s spearheading along with her police chief boyfriend to bring in a “new order,” with Gyorgy as chairman, and have the army protect the town from the rabble and answer the groups other bourgeois complaints.

Werckmeister Harmonies ends in the post-apocalyptic brightly lit morning after the riot with the army in control and Janos fleeing town to save his skin because he somehow has gotten on the “clean town” list of insurgents, even if he doesn’t have an idea why.

It’s a bold film that questions if there’s a God and laments the continual worshiping of blind gods. In Tarr’s hermetic world there’s no benevolent God to ward off evil; it’s human beings who have to take responsibility for their actions. The rabble are attracted to the charismatic Prince who echoes their lies and delusions; the middle-class is attracted to Trunde’s banal self-serving political leadership, as she uses the people and offers them false hopes in saving the state; and the intellectuals have withdrawn to an ivory tower where they have no effect on what is taking place in the now, as Gyorgy is viewed as a defeated thinker. The last shot is of the gigantic whale beached in the market square–an inscrutable figure (a witness to the world’s entropy and disintegration) that is neither good nor evil but a symbol of what’s waiting around the corner as the cycles of violence only repeat themselves.

Though not a work of literary accomplishment, it certainly makes up for it in its provocative allegations and stunning visuals (reminding one of Breughel’s paintings of peasants) and fresh way of telling a story. It hauntingly leaves us to ponder why the world is so fucked up and that there are no satisfying answers through the debased political, cultural and spiritual movements most of us get sucked into following, perhaps as blindly and innocently as did the character played by Lars Rudolf. As in all Tarr films, he asks of those characterized “What does one believe in?” In other words, this is a film that encourages one to put on their thinking cap. 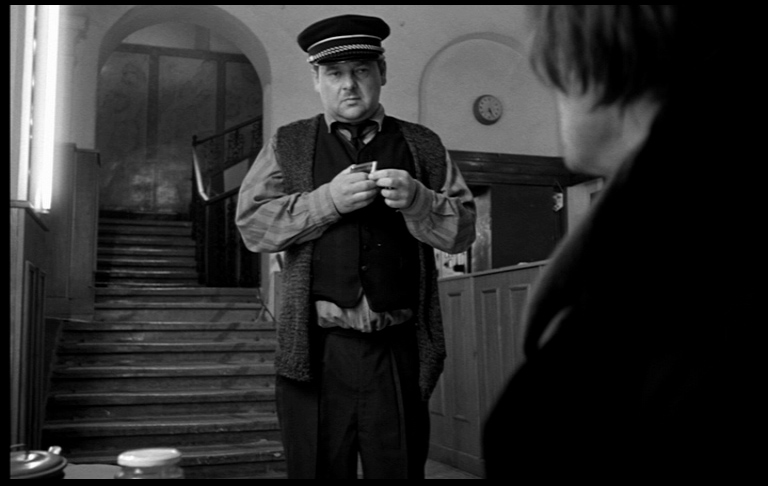