BENEATH THE 12-MILE REEF

“You can bet all the sponges in the ocean that this is no work of Shakespeare.”

A shallow melodrama set among the Greek-American sponge-divers at Tarpon Springs, Fla. It was only the third film shot in the lush wide-screen CinemaScope (the others also were released in 1953, The Robe and How to Marry a Millionaire–but it’s debatable which came first; it’s worth noting that Fox held the rights to the CinemaScope process), and the first shot outdoors. It’s best remembered for its superb underwater photography, its colorful scenic vistas and the scintillating musical score by Bernard Herrmann. In other words, its technical achievements are greater than its artistic virtues. The young stars Terry Moore and Robert Wagner overcame their limited performances because they were so likable and energetic, though Gilbert Roland steals the acting honors with a role tailor-made for his macho man character with a heart of gold. Director Robert D. Webb (“The Adventures of Tom Sawyer”/”Little Nellie Kelly”/”Pardners”) and writer Al Bezzerides base the plotline around Romeo and Juliet, but you can bet all the sponges in the ocean that this is no work of Shakespeare.

The film deals with two great problems: Greek-American Tarpon Springs sponge-diver Mike Petrakis (Gilbert Roland) is in debt because he can’t bring in enough sponges. The reason for this is that he’s not allowed to fish in certain gulf waters by his nearby rival Florida Key sponge-divers, called the “Conch” spongers (English-descended hook-boat fishermen). They are led by the patriarch Thomas Rhys (Richard Boone). The second problem covers the forbidden romance between Rhy’s feisty young daughter, the Conch-girl, Gwyneth (Terry Moore), and the dashing young son of Mike’s, Tony (Robert Wagner). He steals her away from the unappealing hook-sponger heavy Arnold (Peter Graves), who proposed to her.

Mike decides he has no alternative but to dive for sponges at the dangerous 12-mile reef, where his oldest son Pete was killed, or else he will lose his boat-the Aegli. When Mike dies of the bends while diving at the 12-mile reef and his sponges are stolen and his boat is nearly totally destroyed by an accidental fire caused by a raiding party led by the jealous Arnold, Tony runs away with Gwyneth. They marry and her angry pop and his boys and Arnold come after them at the 12-mile reef.

Little Tony becomes Big Tony when he fights off an octopus in the same cave spot where his dad fell fatally ill when caught in a reef and at the same time he fills the borrowed Conch boat of Gwyneth’s with sponges. In this happy ending to the Romeo and Juliet romantic story, love conquers all. At home, Tony’s old-fashioned widowed mom (Angela Clarke) says with a terrible Greek accent that he’s now the man of the family. 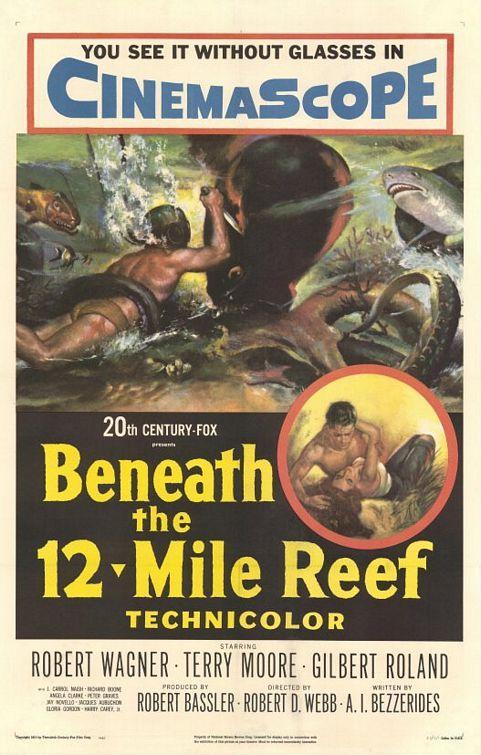