An aggressive, unlikable, married bourgeois couple (Mireille Darc & Jean Yanne) leave Paris to drive to the country to visit his dying father in Oinville and get caught in a massive traffic jam, car crashes, burning vehicles, roadside corpses, violence, destruction and even cannibalism. The film’s memorable traffic jam, a 10-minute tracking shot, captures Godard’s vision of the middle-class world in a state of collapse–which mirrors Hell. When the hearty but helpless consumerist couple take to the back roads and run into murderous, kidnapping, pillaging and rapist Maoist hippies, a bunch of French revolutionaries of the Nationalist Liberation Front, who live in the woods, the film becomes too much and weakens. But not before it issues an all-out attack on consumerism, class warfare and the horrors of conventional life.

It’s a Swiftian satire made to upset Godard’s producers, commercial viewers and, of course, the bourgeois. In the absurdist dark comedy, Western society never looked so sickening on film. It signals Godard’s retreat from commercial film-making and from ever again drawing a large audience, though it’s considered an historical breakthrough film in cinema history and a favorite of avant-garde cinema lovers. 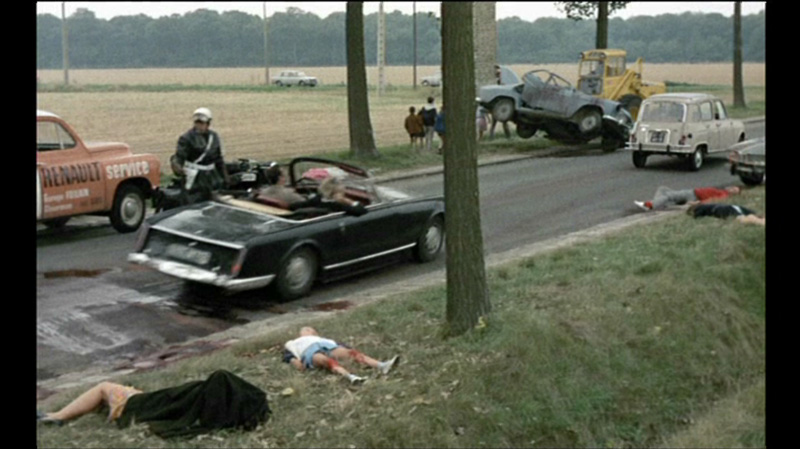