Mechanically directed by former music-video directorFrancis Lawrence (“I Am Legend”/“Constantine”)from a plodding screenplay by Richard LaGravenese, that’s based on the best-selling novel by Sara Gruen. It makes for an overlong and tedious work of pap, one that squeezed the fantasy life out of the novel and was turned into an awkward film that was trying too hard to squeeze in every minor detail in the book. The best thing I can say about it, is that it’s innocuous and just might please those looking to be modestly entertained by something that is not challenging. It’s a dullish Depression-era circus romance, with no chemistry shown between the stiff lovers. Another audience it might appeal to is the one of vengeful animal lovers, who can’t wait for the animal abuser to get his expected comeuppance. This contrived comeuppance comes from the same animal he abused (but that climactic scene is so halfheartedly directed, that it loses its cathartic power and dramatic effect).

It opens with the elderly nursing home resident JacobJankowski (Hal Holbrook) disappointed his son didn’t remember to take him to a traveling circus on his anticipated visit, and he therefore comes alone but arrives after the circus is leaving town. After befriending the helpful Vargas Circus owner, Charlie O’Brien (Paul Schneider), Jacob tells the curious owner about his experience in 1931 with the Benzini Bros. circus.

In flashback we follow the young Jacob (Robert Pattinson), a Cornell veterinary school student, who becomes an impoverished orphan with his parents’ untimely death in a traffic accident just before he can finish his finals and get his degree. The disconsolate lad hops a circus train (rather than doing the rational thing and going back to complete his exam) and inadvertently joins the struggling Benzini Bros.’ circus as its resident vet when he convinces the sadistic ringmaster boss August (Christoph Waltz) that he knows about animals.Jacob immediatelyfalls for the pretty platinum-blond bareback horse riding star attraction Marlena (Reese Witherspoon), the wife of the volatile ringmaster, who rescued Marlena from poverty and made her a circus icon.

To replace Marlena’s horse, put down because of injury and the reason the show can’t go on, August purchases from another circus an elephant named Rosie. Marlena frets about learning a new act, while Jacob is upset because August beats Rosie. By this juncture you know where this pic is going, but it takes such a long time to tell us what we already figured out that it becomes just as boring as watching paint dry.

Marlena bonds further with Jacob over their mutual love of animals, and their attraction gets the attention of her dangerously jealous hubby. Before August can dispose of Jacob by having his goons throw him off the moving train, like he does with his other employees he wants to part company with, Jacob gets help from the other disgruntled roustabouts and performers and that leads to the release of the caged animals, the demise of August and his circus, and the chance for Jacob to become a veterinarian and marry Marlena.

Everything about this pic came out perfunctory. 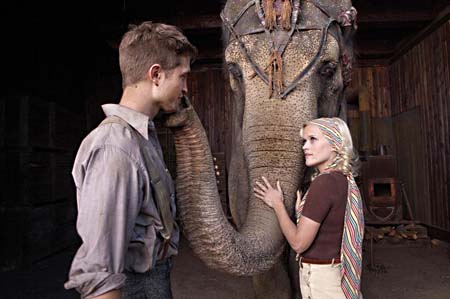