“Errol Flynn’s last Western is an enjoyable old-fashioned one.“

Errol Flynn’s last Western is an enjoyable old-fashioned one, shot in black-and-white. It tells of a gallant Confederate officer getting involved in an Indian war and surrendering his life to act honorably to save a Yankee lady in distress. For an oater, its ending is unusually tragic. Director William Keighley(“The Street With No Name”/”Torrid Zone”/”Four Mothers”) bases it on the story by Alan Le May, who based it on a real incident. The screenplay is by Le May and Winston Miller.

On March 6, 1865, Confederate Captain Lafe Barstow (Errol Flynn), under secret orders from General Robert E. Lee, leads seven Rebs (Kip Waterston, Pierre Duchesne, Pap Dennison, Kay Rawlins, Jimmy Wheat, Jonas Weatherby and Plank) trying to make inroads in California for the Rebels, in a last ditch effort to save the war for their cause. He was sent to recruit the outlaw Cole Smith (Howard Petrie) to join the Reb cause with 500 outlaws under his command. The Rebs show up at the Rocky Mountainrendezvous point, and instead of meeting Cole they meet one of his gang. Later it’s learned that it was indeed the cagey Cole (Howard Petrie) who met them, but did not reveal himself until he sized up his new allies. When the Rebs spot a runaway stagecoach, the eight of them swarm down from the mountain and save from an Indian attack the lives of the rider (Chubby Johnson) and rescue the unconscious passenger Johanna Carter (Patricia Wymore, soon to be Flynn’s third wife). Johanna is coming west to stay with her fiancee, Lieutenant Rickey (Scott Forbes), stationed at a California fort.

When Lieutenant Rickey comes with a search party patrol and 3 Indian scouts from his nearby fort, the Captain sets an ambush and takes him hostage. Two Indians are shot while escaping, but their father, the chief (Nakai Snez), escapes. Rickey also escapes. Fearing an Indian Attack, Cole promises to return in 2 days with his men. But Cole’s horse returns without him and then the Indians return in great numbers. Thereby Lafe allows Johanna and the stage driver to escape by going in the opposite direction of the soldiers. She rejoins her Lieutenant, who is coming to rescue her with a patrol. But the Rebs are slaughtered by the Indians. The Union soldiers salute them for their bravery and honorable deed.

Never mind the story, Flynn is iconic and his performance is breathtaking. 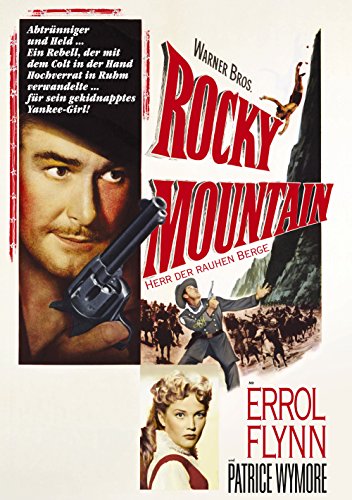