A superior oater. Richard Fleischer directs a Western psychological drama about an ambitious young innocent who discovers his roots after becoming disillusioned by what he’s become. It is based on the story by A. B. Guthrie Jr. and is penned by Alfred Hayes. Lat Evans (Don Murray) leaves his stern father’s house and joins a Texas outfit headed by the trail boss Mr. Butler (Harold J. Stone) that is taking a herd of cattle to Fort Brock, Montana. Lat feels damaged by his father’s rigid rules of living without sin and following the Bible, as his dad excuses losing his ranch by saying money isn’t important. But for Lat money is his way to get a ranch and self-respect, and that means everything to him. He tells his best pal on the trail, Tom (Stuart Whitman), a cowpoke who has larceny in his heart, that “there must be a way of getting rich without stealing.”

Lat plans on hunting wolves for their hide during the long winter, as he decides not to return to Texas. He gets the reluctant Tom to be his partner after he agrees to race the horse he tamed, Big Black, against the Appaloosa owned by the Montana land-baron Jehu (Richard Egan), as his outfit bets a bundle on him to win. Despite Jehu’s efforts to get his Indian rider to cheat, Lat is declared the winner. The two pals celebrate with champagne in the local dance-hall, as Tom’s date Jena fixes him up with the attractive Callie (Lee Remick). They fall in love, but as agreed upon Tom and Lat leave town for the secluded wilderness. Lat is so driven to become rich, that he’s blinded about everything else.

Tom gets fed up with the isolation and leaves, but returns in the nick of time to save Lat from a band of Indian raiders. The Indians attempt to steal Big Black, but when Lat resists they shoot him. Tom after scaring the Indians off with his rifle, takes Lat back to town. But Lat is upset that they must leave the pelts behind, which means he’s still broke. Callie nurses him back to health with plenty of TLC and loans him two thousand dollars from the money she saved up from whoring at the dance-hall, to buy the land he staked out. This gives him his start in ranching, as he then gets a generous loan from the local banker, Mr. Conrad (Albert Dekker), to invest in cattle.

In five years time Lat becomes the wealthiest rancher in those parts, and turns his back on Callie after paying the loan back. He marries Mr. Conrad’s attractive red-headed niece Joyce (Patricia Owens), who is a refined college educated woman and a respected member of the community. At the Conrad’s dinner party he meets other prominent citizens and they fill his head with political ambitions and urge him to be on the school board to gain social respectability. Even though he’s as dumb as a log about everything except ranching, he’s propped up to run for state senator.

But there’s been a rash of horse thieving over the years and a posse is formed by Jehu in which he’s coerced to join, as the men have located the hideout of the rustlers who have been stealing from everybody but Lat. The head of the rustlers is Tom, and Jehu hangs him on the spot despite the protests of Lat to bring him to trial. Before he’s hung, Tom tells his old pal that he’s a hypocrite who prays on Sunday but got rich during the week because he bought stolen horses for cheap at the auctioneers and turned a blind eye to the possibility that they were stolen.

The drama reaches its climax when Callie gets severely beaten up by her now boyfriend Jehu, and the guilty Lat seeks him out to pay for what he did. He gets into a good ole cowboy fistfight with Jehu despite being warned by Conrad that this will ruin his political plans. In the end, Lat proves to be a flawed hero who turns one off by how calculating and money-hungry he is, yet he is still human because he doesn’t lie and he’s courageous enough to fight for what he believes is right despite the consequences. That he remains with the conventional Joyce and spurns the all-giving passionate love Callie has for him because he can’t get over that she’s a tramp, makes him much like a twisted protagonist in a noir film. He’s a complicated hero who realizes that his simple philosophy of life can’t always be achieved, and learns the hard way to be true to himself. He finds he’s most comfortable being around society folks and their preacher, and with money and a proper wife feels very good about himself.

The villains are not the usual one-dimensional types you find in a Western. Whitman is a thief, but he’s loyal and has a heart and is not put off by the love he receives from his dance-hall woman. In many ways, he’s an easier person to sympathize with than Murray. While Egan is shaded more as a one-dimensional villain, but he’s always outsmarted by the Establishment oriented Murray and never seems to get the best of him. In most Westerns, he would have through trickery gotten the better of him and the end battle would have been perceived as one between ‘good and evil.’ In this more abstract dramatization, it’s the so-called pillars of the community that hold all the cards. The real battle is in Don Murray’s head, as he grows into someone who is neither good nor evil — but shaded. The wisdom of Murray’s old trail boss comes home to roost, as he once told the naive young cowpoke: “people change. They don’t turn out like they started.” 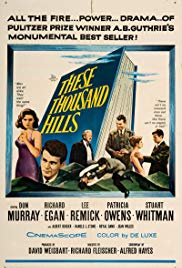