“Tells us little we don’t already know about why most schools need to be fixed.“

Documentarian Davis Guggenheim (“An Inconvenient Truth”/”The First Year“)sets out to give us answers to save the failing public education system, while suffering from liberal guilt when he tells us with shame he sends his own kids to an expensive private school.This bleak and stale look at how communities, parents, teachers and students are affected by their local schools tells us little we don’t already know about why most schools need to be fixed, as it grimly states that the ‘no child left behind’ policy is not working, that the once best American educational system in the world is now one of the worse and that the large amounts of dropouts are not good for the country because they frequently become criminals or unproductive citizens. Guggenheim makes his case against the educational system through showing us the school experiences of the following kindergarten to eight-grade underachieving students: Anthony, Francisco, Bianca, Daisy and Emily. The well-behaved students dwell in the urban areas of Washington, D.C., the Bronx, Harlem, East Los Angeles and Silicon Valley. They all find their public schools (in one case a parochial school) lacking, so have to rely on a lottery to be accepted into a better functioning charter school and a chance to have a better life (charter schools seem to be the answer to all the public school’s problems, as Guggenheim neglectfully fails to follow up on the many other options).

Guggenheim’s cursory study finds the main villains in why schools fail are bad teachers who can’t be fired, unions who protect these bad teachers and fight against progressive changes, and any system that has tenure (never mind that tenure only fails to work when administrators give incompetent teachers tenure and that without tenure even good teachers could be canned for having different views than their supervisors). The documentarian shows a number of schools that are considered “drop-out” factories” and “academic sinkholes,” whose problems go on for generations with no end in sight. Guggenheim also shows how dedicated idealistic teachers make a big difference in whether a child will succeed or not, which is something I think everyone can agree with.

The self-righteous Guggenheim lectures us to go with charter schools and the elimination of tenure with the replacement of merit pay, to save the American free educational system. This convenient lie never faces up to the reality that such policies for this diverse country might only work in some schools and not throughout the country. We are told there’s no real educational commitment (just talk) by politicians to ensure us that getting a good education should be a birthright and not a matter of chance (winning a lottery to get into a better school) or where one lives (in education, we’re not playing on an equal playing field), but Guggenheim gently lets the politicos off the hook as he dissects this failing system and unfairly reserves his harshest barbs for the union.

I have no problem with concerned citizen Guggenheim giving his two cents to the educational debate, but his presentation was so shallow and the two reformers he glamorized as saviors didn’t impress me as having the answers. Geoffrey Canada, founder of the privately funded Harlem Success Academy, gives the film its title by saying as a kid in the South Bronx he was disappointed to find out from his mother that Superman wasn’t real and wouldn’t be there to save all the good people. In any case, the idealistic Canada who seems to be doing some good work, is only at best able to reach a small number of already motivated neighborhood students (besides, I believe if you did a fair study you will find there are many charter schools that are not run right and fail just as miserably as the public schools). It’s interesting to note that the other reformer darling of the film, Michelle A. Rhee, the chancellor of the Washington, D.C., public school system since 2007, has shook up the district’s failing educational system by closing a number of under-performing schools and firing a number of teachers. But since most of those teachers were black, she alienated the black community and was so strident and unconvincing in her pronouncements that she’s now on shaky ground in the black community. There was no evidence reported that she has so far improved the terrible system. During the film she failed to work out an agreement with the union to give up tenure in exchange for up to six figure salaries based on merit, but since has come up with a compromise with the union to institute some form of her merit pay policy. It should be pointed out that Ms. Rhee’s days seem to be numbered, as her chief supporter, Mayor Fenty, couldn’t even win the Democrat primary.

I’m afraid to kick-start this necessary debate it will take a film more willing to explore the deeper changes in American society that have led to this crisis, such as the widening gap between rich and poor. I believe we need both innovative and understanding educators who know how to bring people together to solve their common problems rather than those who act further to divide us by vilifying those with different views (such as the unfairly vilified outspoken articulate Randi Weingarten, the former head of the United Federation of Teachers in NYC, who now runs the American Federation of Teachers, and someone who has arguably in her position helped more students than either one of Guggenheim’s supposed saviors).

Guggenheim, through the voices of his reform-minded educators, sincerely believes the system works for the school bureaucracies and the teachers but not for the children. Maybe that’s a good enough starting point to begin the educational debate and not end it with the simplistic solutions left us in “Waiting for Superman.”I can’t resist noting that I foundGuggenheim clueless as to knowing how to train a teacher to be great and naive for believing even for a sec that merit pay will make teachers better. What I do know is a great teacher is like an artist and each find the necessary skills within them and develops them over years through dedication, experience, hard work and caring about helping others. I think Guggenheim doesn’t really get this, even if he says he does, and therefore neither does his film. 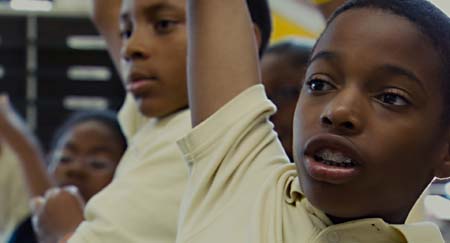 HORSEMAN ON THE ROOF, THE