Wag the Dog made me want to wag my tail. I found its simplistic premise to be politically obscene. To add insult to injury it had no power to inject a scathing political bite or provide worthy satire. Its sophomoric and wise guy approach to politics makes these film-makers look just like the politicians they are satirizing, David Mamet script or not. The shallow premise is to tell of a president accused two weeks before the election of sexual misconduct with a minor and then have his spin doctors create a fictional TV war in Albania so that it takes the public’s mind off the accusations, is certainly plausible. But, I soon tired of the one-idea plot. The film turns to even more absurdity when it introduces a fake war hero Schumann (Woody), created from the war that didn’t exist. It is just yak-yak-yak from then on, Hollywood meets Washington.

The director, Barry Levinson, seems to have lost whatever touch he had from his earlier and mostly autobiographical films centered in Baltimore. Levinson hasn’t made a half-way decent film since making Diner, Tin Men and Rain Man.

This film was just not funny enough to be a comedy or dramatic enough to be a drama, nor sophisticated enough to be a witty political film. It was smug, satisfied with itself for thinking how smart it was for presenting so much political twaddle. Levinson’s idea of a president, is for him to be like a Saturday Night Live television president.

The most serious question asked, concerns how the title of the film came about. “Why does a dog wag its tail? The answer is, “because the dog is smarter than the tail. If the tail was smarter, it would wag the dog.”

For its conclusion, the film has the Prez in China, right before the election. Excuse me, while I take time out for a reality check, after trying to digest this presidential strategy!

Winifred Ames (Heche), the president’s aide, is ‘a woman with no scruples.’ She consults the spin doctor, Conrad Bream (De Niro), ‘a man with no scruples,’ about how to get the Prez re-elected. Conrad is the one who concocted the phony war story. To make it work, he goes to Hollywood to get Stanley Motss (Dustin) to improve on the lie. Motss is an ego-centric producer never having won an Oscar, and all he wants is credit for how smart he is. He doesn’t want money, power, or an ambassadorship, the usual rewards for such favors. Motss runs with the phony war story, creating computer animations to make things look kosher, just like they do for Arnold’s flicks. Oh my !!!

After that “illustrious” start, the picture just goes downhill. The only redeeming quality, is that it has become part of our political lexicon. The title of the movie will be invoked whenever something smells rotten in Washington (and that should be quite often). There was a plethora of insider jokes that either went over or under this outsider’s head. 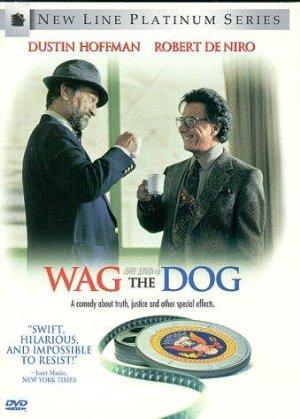